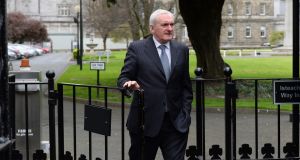 Former taoiseach Bertie Ahern has said the Irish Government should urgently begin bilateral talks with Britain to ensure the State’s interests in key areas are protected after the UK quits the European Union.

Mr Ahern warned, however, that the window of opportunity for such talks is very limited and it will pass if the Government does not act before June.

Mr Ahern addressed a special Seanad committee on the issue of Brexit yesterday.

Ireland, he said, has every right to negotiate bilaterally with the UK on non-trade issues in negotiations on its departure from the EU. None of the main EU negotiators disagreed with him, he said.

“The strength of our argument on non-trade issues is that the Good Friday Agreement allows it and says it and references it.

“For the life of me I don’t understand or accept the argument that we’re precluded from those issues.”

Later, he elaborated on his views, stressing the short time that was available to the government.

“Then there will be a month of reflection where the EU Commission will come to an agreement on the agreed commitment for the Union’s 27 States.

“Then you go into the summer break and the real negotiations will start once the German election is over.

“By then Barnier has said the negotiation terms will be set and he does not want an endless flow of free-flowing discussion.”

It is critical that Ireland begins separate negotiations with the UK during this period on non-trade issues, said Mr Ahern.

Mr Ahern said the focus should be on the Customs Union, the Belfast Agreement and its guarantees.

Such Anglo-Irish talks would not have to be high-profile or “be put up in lights. If we did it, the position of the EU would be we understand your dilemma and understand your problems.

Earlier, Mr Ahern said the last thing Ireland needed during Brexit negotiations is a Border poll. “Now is not the time for a sectarian head count,” he said.

The British are “deluding themselves that they’re going to make great deals” by sending out delegations to India and Australia, since they will need to increase such trade by huge amounts to replace the losses that will occur after they quit the EU

Responding to questions from senators, the former taoiseach said: “The only time we should have a Border poll in my view and I will argue this for the rest of my life is when we’re in a situation that the nationalists and republicans and a sizeable amount of unionists/loyalists are in favour on the basis of consent.”

Pressed by Sinn Féin Senator Niall Ó Donnghaile, who said a European Parliament committee had concluded that the Belfast Agreement might have to be changed in the event of Brexit, Mr Ahern said people should not go looking for difficulties.

People in both parts of the island of Ireland should not be seen by Europe to be “arguing among ourselves, adding that the Good Friday Agreement “gives us every right to deal with issues that we believe are of concern to us”.