Bertie Ahern: Ireland is entitled to negotiate with UK on Brexit 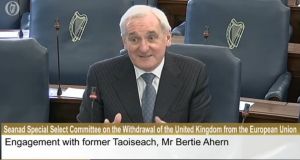 Ireland has every right to negotiate bilaterally with the UK on non-trade issues in negotiations on its departure from the EU, former taoiseach Bertie Ahern has insisted at a meeting of the Seanad’s Special Select Committee on the UK’s withdrawal from the EU.

Mr Ahern said none of the main EU negotiators disagreed with him.

“The strength of our argument on non-trade issues is that the Good Friday Agreement allows it and says it and references it.”

He said the Belfast Agreement was an international treaty and while they were not thinking at the time of Britain leaving the EU, “they were wisely thinking that something could happen down the road.

“So they put in references into the Good Friday Agreement.. in each case....of the importance of the relationship of the UK and Ireland in EU terms.”

Mr Ahern emphasised that Ireland has “every right to bilaterally negotiate, not the trade issues, we accept that the EU, but several of the other issues to be able to negotiate with the British”.

He added: “For the life of me I don’t understand or accept the argument that we’re precluded from those issues.”

“I know Guy Verhofstadt, Michel Barnier and Jean Claude Juncker, I’ve dealt with these guys for 20 years, they don’t have a different view”.

Watch: Bertie Ahern at the Seanad

Mr Ahern said “the very last thing I want out of Brexit is a border poll”.

“The only time we should have a border poll in my view and I will argue this for the rest of my life is when we’re in a situation that the nationalists and republicans and a sizeable amount of unionists/loyalists are in favour on the basis of consent.”

Mr Ahern explained that the border issue with Northern Ireland will pose enormous difficulties if Britain leaves the Customs Union.

He said the only two options open if that happens were if the British government and EU negotiated some kind of special arrangement to ensure borders remained open.

He said that a second option would be placing the border between Northern Ireland and England, rather than between north and south.

Mr Ahern also said that without a trade deal there would be no Brexit agreement. Forty-four per cent of all British goods were sold into the EU at this time, with 16 per cent of all EU products exported into the British market place.

He said Britons were “deluding themselves that they’re going to make great deals” by sending out delegations to India and Australia. The UK needs to stay as close to the EU as possible, he said, because of loss of 5 per cent of trade from the EU would need a 25 per cent increase in other areas just to remain at status quo levels.

“It is undoubtedly the case that if a trade deal is reached then a transitional period of a number of years will have to be put in place post-March 2019 so as to allow any new trading arrangements to take effect between the EU and Britain,’’ he added.

“Business people need to be certain of the rules governing any trading environment.’’

However, Mr Ahern welcomed the softening of the tone of the language used in the Brexit negotiations, saying it was now “more conciliatory’’ than was the case in the aftermath of the British referendum in June of last year.

“This is extremely important because inflammatory language is most unhelpful when governments are engaged in sensitive international negotiations,’’ he added.

“It is easier to dock a ship in calm waters than it is if there is gale force wind blowing over its bow.’’