Ireland negotiating from a ‘position of strength’ on Brexit, says Noonan

Taoiseach says referendum on outcome of negotiations ‘not envisaged’ 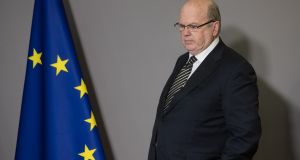 Ireland will negotiate on the UK’s departure from the EU “from a position of strength”, Minister for Finance Michael Noonan has told the Dáil.

“Given the complexity of the issues involved, it is likely that the negotiations on the future relationship agreement will take longer than two years, ” he said.

He believed that a transitional arrangement between the exit agreement and the future relationship agreement was vitally important to ensure an orderly exit and to provide certainty.

During a debate on Brexit, Mr Noonan said, “The Irish economy remains resilient. Government actions over recent years have laid the foundations for a solid and sustained economic recovery.

“The Government has put structures and resources in place to ensure that deep analysis is conducted across all sectors, with all departments and agencies charged with making Brexit a priority.

“The challenges that we face as a result of Brexit are mainstreamed across my department, and we have co-ordination happening at key levels across Government, ” he added.

“Ireland will negotiate from a position of strength, as one of 27 member states firmly in, and committed to the European Union. We will pursue our national interests and priorities forcefully within the established legal and political framework for the negotiations.”

Earlier Taoiseach Enda Kenny said a referendum on the outcome of the negotiations on the UK’s departure from the EU was “not envisaged”.

He was responding to Fianna Fáil chairman of the Public Accounts Committee Seán Fleming who said nobody yet knew whether the outcome of the negotiations would require a referendum.

Mr Fleming pointed out that if the outcome resulted in amendments to the European treaties, then a referendum in Ireland would be necessary.

And he called on the Taoiseach to confirm that he could not rule out a plebiscite. But Mr Kenny said: “A referendum on the EU treaties is only necessary in this country when the Attorney General of the day advises the Cabinet of the day that there is a transfer of sovereignty under the treaties. That is not envisaged here.”

Mr Kenny said they envisaged that the UK would have as close as possible a relationship with the EU, and Ireland wanted to hold onto its “very close trading, social and political relationships” with Britain.

She noted British prime minister Theresa May’s letter of exit referred to “the need to avoid cliff-edges and refers to implementation periods to adjust in a smooth and orderly way to new arrangements”.

Ms Fitzgerald said she was heartened by the UK government’s consistent statements, reinforced by Ms May’s letter, that security co-operation was one of her top priorities.

Ms Fitzgerald said, however, that “negotiating new instruments for police and judicial co-operation can be a lengthy and complex process”.