Delay to water committee’s report to allow for legal advice 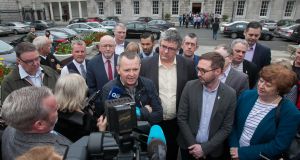 The Oireachtas committee on water will not sign off on its final report on Thursday to allow Fine Gael seek fresh legal advice on its contents.

The party has said the recommendations do not comply with European law and breach the Water Framework Directive.

The committee’s senior counsel has said the report is sufficient. However, it is now seeking additional legal opinion.

The final recommendations on the issue include refunds for householders who paid their water charges, funding of domestic water services through general taxation, and the installation of meters at apartment blocks.

The committee was due to vote on its final report on Thursday after weeks of meetings and major disagreement between Fine Gael and Fianna Fáil, on whose support the minorty government relies.

The party may breach the confidence and supply arrangement and risk a general election by refusing to implement the measures as they feel they may run counter to legal advice from the Attorney General.