Call made for removal of members of Irish Greyhound Board 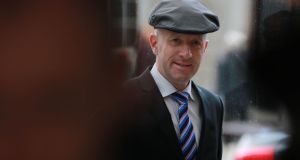 Independent TD Michael Healy-Rae told Dáil: “Perhaps people should be removed if necessary. It is about time . . . It is a disgrace.” Photograph: Nick Bradshaw

Independent TD Michael Healy-Rae has said it is “about time” that people were removed from the Irish Greyhound Board for mismanagement.

He claimed that “genuine people who breed and race greyhounds are being highly blackguarded”.

Mr Healy-Rae told the Dáil that 1,000 people attended a meeting on Sunday of those in the greyhound industry in Horse and Jockey, Co Tipperary, to discuss “all issues within the industry, including mismanagement by the Irish Greyhound Board”.

He said it was time for Minister for Agriculture Michael Creed and Minister of State Andrew Doyle to intervene and take action “to resolve the impasse between the Dublin Greyhound Owners and Breeders Association and the Irish Greyhound Board, to get greyhound racing back in our capital city”.

The board has decided to sell the Harold’s Cross greyhound racing track, a move opposed by the association, which prompted a protest outside Dublin’s Shelbourne Park racing track and has resulted in the cancellation of racing in Dublin since the end of February.

The board has debts of €21.6 million. A Government report in 2014 recommended asset disposals, including the sale of Harold’s Cross, described by dog owners as the historical “Dublin man’s track”.

Mr Healy-Rae said: “Perhaps people should be removed if necessary. It is about time. Current and previous Ministers have left this situation down. It is a disgrace.”

Taoiseach Enda Kenny told the Kerry TD “that particular Bill has got out of the coffin box in which it was located for a very long time, and is up and running”.

He said the Bill underwent prelegislative scrutiny at committee on Tuesday.

“It is running and let us hope it gets around the track in good time and be completed and deal with the issues raised by deputy Healy-Rae.”

But Mr Healy-Rae said there were no dogs running in Dublin and he accused Mr Kenny of not answering the question.