FG not bound by water report and talk of election ‘rubbish’, says Varadkar 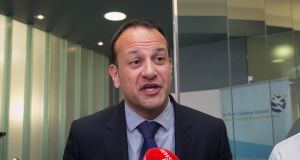 Fine Gael is not bound to comply with conclusions made by the committee on the future funding of water services, Minister for Social Protection Leo Varadkar said.

He said talk of a general election on the issue was “rubbish”, ahead of a final meeting and vote by the Oireachtas committee on water charges on its recommendations on Thursday.

Later, in heated Dáil exchanges on the water charges controversy, he told Solidarity PBP TD Paul Murphy, who opposed the charges, he wanted to “congratulate” him on the role he had played in reducing Fianna Fáil to what it was now.

“The party of Lemass, the party that was once proud to stand up for things…that would do the right thing for the Irish people… is now in a position that it determines its position on water solely out of their fear of you and Sinn Féin,” he said. He was speaking during Opposition Leaders’ Questions on Thursday.

The final recommendations on the issue include refunds for householders who paid their charges, funding of domestic water services through general taxation, and the installation of meters at apartment blocks.

However, these recommendations have resulted in a bitter political row between Fine Gael which is opposed to them ,and Fianna Fáil, Sinn Féin and Solidarity, who support them.

Fine Gael may breach the confidence and supply arrangement and risk a general election by refusing to implement the measures as they feel they may run counter to legal advice from the Attorney General. The committee is to request further legal advice today.

The party on Wednesday night confirmed it would not support the final report of the committee.

The committee meeting descended into chaos on Wednesday as Fine Gael sought fresh legal advice from a senior counsel on the report’s recommendations. The legal opinion confirmed the wording of the report was sufficient to meet EU requirements, and insisted it was the role of the legislation to perfect the language.

Problem for FG spin is that their own minister confirmed last week that a fair deal was done https://t.co/zEIqpm7Fl3

Fine Gael then insisted that legal advice was not “proper” and declined to accept it. A series of further votes were also held at the meeting and the party lost on each occasion.

Mr Coveney has said he will not introduce legislation which could be incompatible with the EU Water Framework Directive.

Mr Cowen said Mr Coveney had changed his position on the recommendations because of internal Fine Gael politics.

“It’s not up to us (the committee) to bring forward legislation. That is the job of the government. They have to recognise the will of the committee.”

Mr Cowen said a failure by Fine Gael to legislate for the water charges recommendations would be a breach of the confidence and supply arrangement.

However, Mr Varadar said he had reread the confidence and supply agreement between Fianna Fáil and Fine Gael, which underpins the minority government and which contains passages on water, last night.

He said it allows individual parties to take differing positions on the issue of water charges.

“Very specifically on the section on water, it allows individual parties to retain the right to have positions on this issue so we are not bound by the outcome of the committee report which of course has yet to be agreed,” he said. “But we are not bound by it but one thing I am very confident of is that we are not going to have a general election on the issue of water.”

“A general election would not solve the issue of water, unless one party was to get an overall majority and I don’t think that is a realistic possibility,” Mr Varadkar added.

He said Fianna Fáil’s position on the issue was due to a “fear and terror” of Sinn Féin and the hard left who were attracting traditional Fianna Fáil voters.

Mr O’Dea claimed Mr Coveney had performed a “volte face” on the water charges issue and that his position was in fundamental breach of the confidence and supply agreement.

“We’ve kept our side of the agreement,” Mr O’Dea told RTÉ’s Morning Ireland. “We’ve worked hard on this committee. We have come up with recommendations that are legally sound.

“It is up to the Government now to honour their part of the bargain and legislate the recommendations accordingly. It is incumbent on the government to go ahead.”

The deal agreed between Fianna Fáil and Fine Gael binds the Government to legislate for the committee’s recommendations. If Fine Gael refuses to facilitate such proposals it will represent the first breach of the confidence and supply agreement since its formation and may risk a general election.