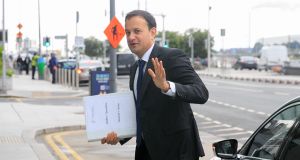 Tánaiste Leo Varadkar during a session of the Dáil at the Convention Centre, Dublin this month. Photograph: Gareth Chaney/Collins

Tánaiste Leo Varadkar has said that he is willing to wait for the outcome of an investigation into a complaint by Minister for Agriculture Barry Cowen even though there were more questions to be asked and answered.

Until the Garda investigation into Mr Cowen’s complaint that a report that he tried to avoid a Garda checkpoint was completed “there probably isn’t any more to say about it,” Mr Varadkar told RTÉ radio’s Morning Ireland.

Allegations that Mr Cowen did a U-turn before a Garda checkpoint in 2016 have led to demands from both Government colleagues and Opposition parties for him to answer further questions on his encounter with gardaí at that time.

He was driving home on a provisional licence from an All-Ireland football final when he was stopped and breathalysed. He was subsequently fined and banned from driving for three months, something he apologised for in the Dáil last week. He made no reference to allegations that he did a U-turn to try to evade the checkpoint when he addressed the House.

The Tánaiste said he agreed with Green Party leader Eamon Ryan there were further questions to be asked and answered. “We know that Minister Cowen committed a motoring offence four years ago, he has apologised for that, he paid the price for it which was a three month ban, and he has since regularised his affairs, and has a full clean licence.

Mr Varadkar said that a different issue has arisen since then, which was the Garda report that Mr Cowen may have tried to avoid a Garda checkpoint. “He says that’s untrue, he’s made a complaint to the gardaí about that to have that record corrected. I understand the gardaí are carrying out an investigation into that. At least until that investigation is done there probably isn’t any more to say about it.

“We will have to see what the outcome of that investigation is.

“I’m sure Mr Cown will answer any more questions that are pertinent, more important is that he has made a complaint to the gardaí about this Garda report, I understand the Commissioner has appointed somebody to investigate. We really need to hear the outcome of that investigation before any more steps are taken.”

Mr Varadkar said he did seek an assurance from the Taoiseach that there would not be any more revelations or any more stories on the issue other than what was already known.

Meanwhile, Sinn Féin leader Mary Lou McDonald said there needs to be clarity on the issue.

Ms McDonald said she accepted people made mistakes and that Mr Cowen had apologised.

This wasn’t about making political noise, she said, there was a need to know which version of events was correct.