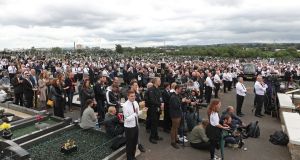 Councillors in Belfast have voted in favour of carrying out an independent investigation into the handling of the funeral of senior republican Bobby Storey.

Belfast City Council heard how confidence in the council cannot be restored until a full and rigorous investigation is held.

Earlier this week, council officers were forced to apologise to families denied the same cremation service as the IRA veteran on the day of his funeral.

A funeral procession took place for Mr Storey in west Belfast last Tuesday, before his remains were transferred to Roselawn Cemetery.

The service for the senior republican was the only one of nine that day where 30 people were allowed to attend an outdoor committal service on site.

The other eight cremations were not allowed services at the site.

Ulster Unionist Sonia Copeland told the council that she recognises the hurt of those who were not afforded the same funeral.

“Nothing I have heard has changed my view that public confidence could not be restored by anything other than a full and independent investigation,” she said.

“I will play no part in any witch-hunt, I will not join bombastic calls for rolling of heads. I expect that facts, warts and all.”

“I have known him (Bobby) all my life and he has been a huge influence on me,” she said.

“I will never forget the support he gave to me and my family when my brother was murdered a number of years ago.

“He stood with us as we fought for change in the justice system. He gave that support to hundreds of people. He earned the respect of the community he lived in, whether they were republican or not.”

Mal O’Hara, Green Party councillor, said the council must get to the bottom of the incident to restore faith in the council.

“I am conscience these series of events put at risk the progress we have made in reducing community tensions.

“I am worried this weekend that working class communities will bare the brunt of this tension. There are wider questions about using Milltown Cemetery for mass gatherings, PSNI presence or not and what breaches may or may not have occurred.

“There are challenges, others have alluded to it, in how much information elected representatives were provided with after the event. The sporadic information and drip-feed to elected members has allowed this situation to toxify, escalate and destablise communities.

“The change in regulations only became operational for one family.”

The PUP’s John Kyle said the events of the last week had been “damaging and disturbing”. He told the council the actions of Deputy First Minister Michelle O’Neill at Mr Storey’s funeral showed “breathtaking hypocrisy”.

Councillors also condemned threats made against the council’s director of city and neighbourhood services Nigel Grimshaw over the fallout from the republican’s funeral.