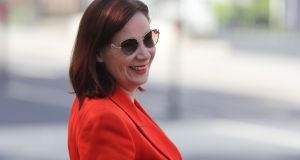 Josepha Madigan has been appointed a Minister of State. Photograph: Nick Bradshaw

A Fianna Fáil TD has accused Taoiseach Micheál Martin of insulting him and his community by passing him over for a junior ministerial post.

Dara Calleary, the Government Chief Whip, is a super junior minister who sits at Cabinet.

Mr Calleary, a TD for Mayo, has also been given responsibility for sport and the Gaeltacht, following an outcry over his being passed over for a senior ministerial role at the weekend.

He said on Monday he was angry and disappointed at not being selected for a senior role in Cabinet.

“We had a very difficult conversation. I told him I was disappointed,” he said of his conversation with the Taoiseach.

There was also controversy over the lack of a senior minister from the west and the new line up of ministers announced on Wednesday night attempts to address that criticism about regional imbalance.

Mr Moynihan, who was the Fianna Fail party’s chief whip, said Mr Martin had “insulted me and my community” by not appointing him a junior minister.

He said he is “very, very disappointed with being let down”. He said Fianna Fáil held two out of three seats in his constituency.

Mr Moynihan said he “worked extremely hard over nine years to rebuild (the) party, took a lot of stick in terms of picking candidates” but got “no thanks”.

“He has insulted me and my community,” Mr Moynihan said.

“Very, very disappointed with him.”

Mr O’Callaghan told The Irish Times he was offered a junior position in the Department of Justice, with responsibility for law reform.

“I was asked this afternoon by an Taoiseach, Micheál Martin TD, to accept an appointment as minister of state in the government. Having thought carefully about this offer I have decided not to accept,” he said.

“The reason I am not accepting is because I believe my energy and abilities will be better used as a backbench Fianna Fáil TD rather than as a junior member of government.

“At a time when many of our party’s senior members will be preoccupied with their ministerial duties, I want to devote more time to strengthening our great party by making it a more attractive option for young voters. I also believe Fianna Fáil needs strong voices outside government who can ensure that our party’s identity can be protected during the term of this coalition government.

“I wish Micheál and his government every success in the years ahead.”

The outgoing Fine Gael Minister for Education Joe McHugh is understood to have also turned down a junior ministerial post.

Mr Chambers has been appointed Minister of State at the Department of Finance with responsibility for financial institutions.

Mr Collins has been appointed Minister of State at the Department of Education. When the “votegate” scandal erupted in the Dáil last year he lost his portfolio as the party’s spokesman on jobs, enterprise and innovation.

The Fianna Fáil, Fine Gael and Green party leaders did not co-ordinate their appointments for the senior ministries resulting in the controversy over the absence of a minister in the West.

The new Ministers of State at a glance:

Robert Troy - Department of Foreign Affairs and Trade (Trade Promotion). Following the formal reconfiguration of departments, he will be assigned to the Department of Enterprise, Trade and Employment