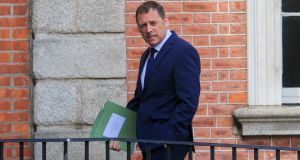 Minister for Agriculture Barry Cowen has faced calls to resign since news of his drink driving ban emerged a fortnight ago. Photograph: Gareth Chaney/Collins

The Garda Síochána Ombudsman Commission (Gsoc) is being asked by the Garda to investigate the alleged leaking of information concerning Minister for Agriculture Barry Cowen’s drink driving arrest.

It follows a statement by Mr Cowen accusing gardaí of criminality for leaking allegations that he attempted to evade a garda checkpoint before he was caught drink driving.

The Sunday Times reported details of the Garda record of the September 2016 incident which stated the Offaly TD was pursed by gardaí after doing a U-turn before a garda checkpoint.

Mr Cowen admits receiving a ban for drink drinking but denies attempting to evade gardaí. On Sunday, he issued a statement that the garda record was “incorrect” and suggested he would take legal action against the newspaper.

“This incorrect Garda record can only have come into the possession of the newspaper through a criminal act.

“It is a criminal offence for a member of an Garda Síochána to disclose any information obtained in the course of his or her duties. I am informed that An Garda Síochána has commenced a criminal investigation into the source of this leak.”

This morning a Garda spokesman confirmed a “preliminary examination” of the matter before stating the matter will be referred to the ombudsman.

“As Minister Cowen’s statement constitutes a complaint against a member or members of An Garda Síochána the Commissioner will be referring the matter to Gsoc for its consideration.”

In a statement, Gsoc said it “has to date received no referral, complaint or notification from the Garda Síochána in relation to this matter”.

Leaking certain personal information is an offence under the Garda Síochána Act 2005 punishable by up to five years in prison.

Mr Cowen has faced calls to resign since news of his drink driving ban emerged a fortnight ago. Taoiseach Micheál Martin said he had not been informed of the matter before being contacted by a newspaper about it just before it came into the public domain.

“It is a source of deep regret. My actions have reflected poorly on the work of elected representatives and on my part,” Mr Cowen told the Dáil last week.

Mr Cowen, who was on a provisional license at the time, was given a three month ban after being found to be over the limit while driving home from the All-Ireland football final.

On Sunday, the Fianna Fáil TD said he is seeking a copy of the “incorrect” record which states he tried to evade the Garda.

“I did not evade, or attempt to evade, a Garda. Such an act would constitute a serious criminal offence and I was not charged with such an offence. On being informed of its existence I sought a copy of this incorrect record and am taking steps under the Data Protection Act to have it corrected.”

He said the leaks were a flagrant breach of criminal law and “my rights under data protection law” and that they were an “attempt to cause me the maximum personal and political harm.

“By publishing this story The Sunday Times has consciously participated in, and facilitated, this and I will be instructing my lawyers to take all necessary steps to vindicate my good name and data protection rights,” Mr Cowen added.