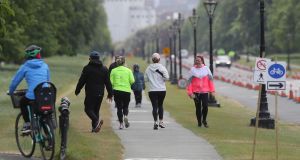 People walk on pedestrian lanes on Chesterfield Avenue in Dublin’s Phoenix park after the OPW brought in measures to help with social distancing during the coronavirus pandemic. Photograph: Brian Lawless/PA Wire.

Minister of State at the Office of Public Works (OPW) Patrick O’Donovan has defended the decision to reopen several gates into Dublin’s Phoenix Park to vehicle traffic.

“I would love to see the Phoenix Park maintained for park use only, but I’m also very conscious of the fact that the western side of Dublin has grown up around the park, and whether we like it or not for an awful lot of people it is a commuter route,” he told RTÉ radio’s Today with Sarah McInerney show.

Mr O’Donovan said the park was a ”thoroughfare” for some commuters driving from Longford, Westmeath, Meath and parts of Dublin.

The decision to reopen the gates was taken, he added, to allow the OPW to monitor traffic congestion on the western side of the park.

“The OPW had actually started this process with traffic management counts...the OPW was trying to count how many actual travel movements are there through the park because we don’t even have that level of data.”

Following the introduction of the 2km travel restrictions in March in response to the Covid-19 pandemic, the OPW closed the park gates to traffic with the exception of the Castleknock and Parkgate Street entrances.

These gates remained open to allow the continued use of Chesterfield Avenue as a through-road, and to maintain access for Áras an Uachtaráin, the US ambassador’s residence and Garda headquarters.

Plans to reopen the gates on two occasions in June were halted but as of Friday, all of the perimeter gates, with the exception of Knockmaroon Gate, have reopened.

Green Party TD for Dublin Central Neasa Hourigan expressed disappointment at the OPW’s decision and the manner in which it was announced and called for clarity on how it was reached.

“Just a fortnight ago the OPW announced that it would maintain the closure of the peripheral gates to the Phoenix Park in order to facilitate the significant increase in use of the park by walkers and cyclists of all ages in recent months,” she said.

“At the end of the working day yesterday it announced that it planned to reopen the perimeter gates. No rationale has been supplied for this complete about-face.”

Mr O’Donovan said he had received emails and calls for and against the reopening of gates for traffic, and that he was committed to reducing traffic in the park.

“But we can’t just ignore the fact that the traffic volumes are growing as the economy reopens and we also can’t ignore the fact that by the end of August the schools are going to be reopened and we would then be dragged into a decision, probably in haste, to open the gates without knowing what impact it’s going to have in the longer term,” he said.

Mr O’Donovan said the OPW wanted to work with local authorities, public representatives, transport bodies and locals to see how the park will develop into the future.

“The one good thing is this pandemic has forced us to look at the park in a completely different way..,” he said.

Mr O’Donovan said he would like to see a reduction in traffic in the park, but he pointed out that it is a thoroughfare.

“It is the lungs of Dublin but unfortunately it has also become an artery and over time we need to reduce that but we need to be realistic and I’m committed to working with people to do that.”