Legal difficulties over abortion in rape cases to be outlined 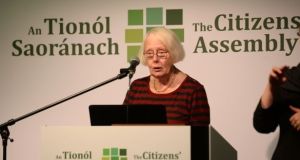 The Oireachtas committee examining the Eighth Amendment is to be advised of the legal difficulties in allowing terminations in the cases of rape.

Tom O’Malley, a senior lecturer in law at National University of Ireland, will brief the committee members on Wednesday on the challenges it may face if it recommends abortions should be allowed when a woman alleges she has been raped.

Mr O’Malley says, in these circumstances, consideration would have to be given to the kind and level of proof that would be required.

At one extreme, nothing less than a conviction by a criminal court would suffice and at the other extreme, a simple assertion by the woman that she had been a victim would be sufficient, he adds.

“The first of these options would simply not be viable because of the length of time it takes to process a serious sexual offence case from the making of a complaint until the ultimate disposal of the case by the relevant criminal court.

“Everyone convicted of such an offence also has a right to appeal against verdict, sentence or both to the Court of Appeal,” Mr O’Malley says in his opening statement.

If an assertion from a woman is all that is required, he says this will be difficult when rape is committed by intimates or acquaintances and may not be reported.

While these are not insuperable legal obstacles, the committee will be advised it may be necessary to establish a working group to advise on this matter.

The committee will also hear from Terminations for Medical Reasons, a group of parents who have been affected by pregnancies where there was a diagnosis of a severe or fatal foetal anomaly.

We also have to leave our baby in a coffin in our car, covered by a blanket or in the boot, while we cross the Irish Sea

In its submission, it says women who chose to terminate their pregnancies were forced to travel and left feeling “like medical refugees”.

It added: “We are abandoned by Ireland – the State and its people – isolated from our families and friends, and separated from the trusted medical team who looked after us up to this point.”

When bringing remains home, the group says it has often been forced to “go to a supermarket to buy freezer packs, and then we have to stop at regular intervals to open the coffin and change them so that we can keep our baby cold”.

“We also have to leave our baby in a coffin in our car, covered by a blanket or in the boot, while we cross the Irish Sea.

“If we are coming home by ferry but don’t have a car, we have to carry the coffin on public transport – buses or trains – and carry our baby on to the ferry as a foot passenger.

“If we are flying home, we may be able to bring our baby’s remains on the plane.”

A group advocating against allowing terminations in such cases will be asked to give evidence next week.

Meanwhile, the committee is expected to reject a motion from Solidarity TD Ruth Coppinger to vote on a repeal of the Eighth Amendment from the Constitution at Wednesday’s meeting.