Paschal Donohoe said borrowers had been treated disgracefully by banks 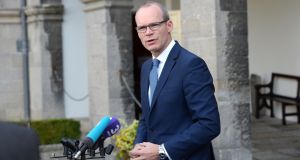 Simon Coveney told the Dáil that different banks are behaving differently in terms of the pace of their co-operation with the Central Bank. File photograph: Dara Mac Donaill

The Government expects comprehensive statements from the banks to bring the tracker mortgage scandal to an end, Minister for Foreign Affairs Simon Coveney has told the Dáil.

He said Minister for Finance Paschal Donohoe had made it clear that the Government regarded their behaviour in the scandal as totally unacceptable.

“Banks should be there to serve an economy and serve a society as opposed to the other way around,’’ he said.

Mr Coveney said lest anybody be unaware of the extent and seriousness of the scandal, by the end of September €163 million had been given back to 3,300 customers.

“This is money that was taken inappropriately from families right across the State, many of whom were put under huge pressure during that period,’’ he added.

He said the Minister for Finance would make a statement to the Dáil on the matter on Wednesday.

Mr Donohoe had not been prescriptive on what he intended to do until he got clarity from the banks on what they intended doing, he added.

If the Government was not satisfied with the response from the banks, the Cabinet would meet to decide what to do.

Mr Coveney said there was still a cultural problem in the banks that needed to change.

He said the Central Bank and Mr Donohoe had made very blunt statements in terms of the needs for the banks themselves to respond in a more comprehensive way than had been the case to date.

“Clearly different banks are behaving differently in terms of the pace of co-operation with the Central Bank,’’ he added.

“That is also something that needs to come to an end this week.’’

Mr Coveney said the Cabinet meeting on Monday night was mostly taken up with the issue.

He said Mr Donohoe had made it crystal clear he saw it as a totally unacceptable breach of the kind of standards the banks should have.

The Minister, who was taking Opposition Leaders’ Questions, was replying to Fianna Fáil leader Micheál Martin who said it had taken last week’s Oireachtas finance committee meeting to get a response from the Government.

Mr Martin said the Government was standing by and putting the interests of the banks ahead of the public.

Later, Mr Donohoe told the House he had just concluded his meetings with the banks’ chief executives.

“I and the Government are not satisfied with the progress that lenders have made to date and believe that impacted customers should by this time have their tracker mortgages restored and, where appropriate, have received redress and compensation,’’ he said.

Mr Donohoe said borrowers had been treated disgracefully and many had incurred considerable losses and in some cases even more significant harm.

“We should be clear it was the mortgage lenders that caused this harm to their customers and the primary responsibility for rectifying the problem rests with them,’’ he added.

He said the time had finally arrived for banks to act in the best interests of their impacted mortgage customers.

Mr Donohoe said he would have more contact with the banks in the coming days and he would update the House on Wednesday.

Independent TD Mattie McGrath said the courts could not give protection to those affected, and the Central Bank was “toothless, useless and totally fruitless’’.

As many as 30,000 homeowners have potentially been caught up in the scandal which saw banks wrongly refusing customers access to loss-making tracker mortgages in the post-crash period.

Some of those who were overcharged went on to struggle to meet their repayments and some lost their homes through repossession.