Ronan Mullen accused of ‘distasteful and offensive’ remarks about Savita 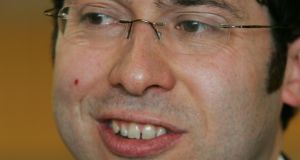 Mr Mullen was not present at the time of the Seanad debate on Tuesday. File photograph: Cyril Byrne

Labour Senator Ivana Bacik has described remarks made by Independent Senator Ronan Mullen about Savita Halappanavar as “distasteful and offensive’’.

Speaking in the Seanad, she said it was good to see the Joint Committee on the Eight Amendment of the Constitution working in public.

Mr Mullen was asked last week on RTÉ’s Today with Sean O’Rourke programme whether Ms Halappanavar would still be alive if she was given a termination when she asked for one.

Labour Senator Aodhán Ó Ríordáin said Mr Mullen should be asked to apologise for his remarks.

Mr Mullen was not present at the time of the Seanad debate.

However hours after making the comments on RTÉ last week Mr Mullen said he was not talking about Ms Halappanavar’s personal circumstances and “never would” do so. He said: “To suggest I was is bad faith.”

Cathaoirleach Senator Denis O’Donovan said on Tuesday the remarks were not made in the Seanad and were outside his jurisdiction.

Mr O Riordain said Mr Mullen had insulted the name and the family of a dead woman.

Ms Halappanavar (31) died on October 28th, 2012 at Galway University Hospital, one week after she presented with back pain and was found to be miscarrying her 17-week pregnancy.

Although the pregnancy was not viable, her requests for termination were refused because there was a foetal heartbeat. She contracted sepsis and died of multi-organ failure and septic shock.

Meanwhile Fine Gael Senator Paul Coghlan claimed in the Seanad that an opinion page article by journalist Kitty Holland in The Irish Times on Tuesday was “totally biased and one-sided’’.

“Ms Holland argues for abortion on demand regardless of circumstances and criticises the joint committee for taking a vote last week recommending the repeal but not in full,’’ he added.

“I would argue differently.’’

Mr Coghlan said Ms Holland wanted total repeal and full abortion with no regard for the life of the unborn.

“I regard the article as disgraceful and I am surprised and disappointed that a responsible respectable newspaper such as The Irish Times has allowed such a lack of balance and objectivity,’’ he added.

Ms Bacik said that was not what Ms Holland had said in the article.

Mr Coghlan said he had read the article and was giving his interpretation.

“I hope The Irish Times will act immediately to correct this appalling and outrageous situation,’’ he added.