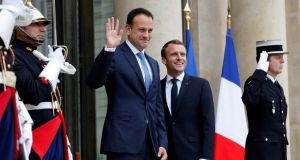 Taoiseach Leo Varadkar has backed French president Emmanuel Macron’s proposal for Europe-wide “democratic conventions” on the future of the EU next year.

“Both President Macron and I believe it’s really important to engage our citizens on this,” Mr Varadkar said following an hour-long meeting with Mr Macron at the Élysée Palace.

“We haven’t decided the exact mechanism,” Mr Varadkar said. “But I have asked Minister Helen McEntee, the Minister of European Affairs, to lead on this. Over the next couple of weeks she is going to make an announcement on how we are going to engage citizens and civic society on the future of Europe.

“The last thing we want to do is present a package of reforms to parliament or a set of proposals to the public and it’s the first time they’ve heard of them.”

The Irish electorate rejected the Treaty of Nice by referendum in 2001, but approved it in a second referendum the following year. The same experience was repeated with the Treaty of Lisbon in 2008 and 2009.

During their meeting the two leaders also discussed Brexit. “I renewed the full support of France for Irish concerns because Ireland is the country most affected by Brexit,” Mr Macron said. “The achievements of the Good Friday agreement must be preserved.”

The French president placed the onus on Britain, saying: “It is the UK which must propose concrete solutions to minimise the impact on the Border between Ireland and the UK…That is a subject of constant attention for the EU and for France.”

Speaking to Irish media afterwards, Mr Varadkar said Ireland “needs to continue to explain the very unique issues that face Ireland [in Brexit]. We assume that everyone understands them. They don’t necessarily.”

For other Europeans the biggest issue is “how much the UK will have to pay to leave”, Mr Varadkar said. “I always point out to my European colleagues that for us this is about much more than money. This is about the future of peace on our island, the future of relations north and south and east and west.

“Any opportunity I have to do that is valuable. I am going to have to invest more time in the months ahead going around to European capitals and explaining why for Ireland this is such a big deal.”

They expressed strong agreement on protecting their agricultural sectors. Both oppose a provision in a proposed trade deal which would allow the Latin American trading bloc Mercosur to export 70,000 tonnes of beef to Europe annually.

Digital taxation remains the only major disagreement between Mr Varadkar and Mr Macron. Both stressed that they want the digital sector to flourish in Europe, and that they want internet giants to pay fair tax.

Under a compromise last week the Organisation for Economic Co-operation and Development (OECD) and the EU Commission will both propose solutions for digital taxation next year.

Mr Varadkar favours a “global” solution, while Mr Macron wants a European solution. Though they discussed the issue in “robust” terms, Mr Varadkar said there were no hard feelings.

Mr Varadkar described the talks as “very deep and detailed”.

He said “both of us left with a sense that the Irish and French friendship is very strong”. Both noted that with the departure of the UK, France becomes Ireland’s closest ally in the EU.