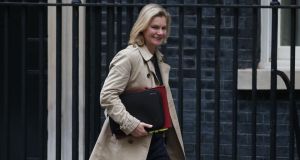 Britain’s minister for women and equalities Justine Greening said: ‘Our sisters need to have their human rights to be upheld’. Photograph: Daniel Leal-Olivas/AFP/Getty

The UK government has detailed its plans to provide free abortion services in England for women from Northern Ireland.

The government announced a change of policy in June in an attempt to head off a Tory rebellion in a vote on the queen’s speech. Dozens of Conservatives had suggested to whips that they would vote on an amendment spearheaded by the Labour MP Stella Creasy to give Northern Irish women free access to termination.

Northern Irish women are charged around £900 (€1,013) to have a termination in other parts of the UK. Ms Creasy withdrew her amendment after Justine Greening, the UK equalities minister, said the charge was an injustice and the government would change its stance.

By the end of the year Northern Irish women will have the right to access free abortion services, and a central telephone booking system will be set up for women to arrange an appointment with a healthcare professional in England.

Fifty years ago on Friday, the Abortion Act legalised terminations in England, Wales and Scotland but not Northern Ireland.

Ms Greening said the three main providers of abortions in England had not been charging Northern Ireland residents since her announcement in June and the government would be reimbursing them for these services.

“The funding will be accessed via a grant scheme that will be administered by the department of health,” she said in a written ministerial statement announcing the change. “The cost of this service will be met by the Government Equalities Office with additional funding provided by HM Treasury. A small number of procedures will continue to be provided through the NHS where this is necessary for medical reasons.”

Prior to Ms Creasy’s amendment and the threat of a Conservative rebellion, the department had gone to the supreme court to defend its policy of not funding abortions for Northern Irish women in England, arguing that to do so would undermine Stormont.

Research suggests around 700 women a year travel from Northern Ireland to England, Wales or Scotland for the procedure. Those on incomes of less than £15,276 or receiving income support will now also get their travel and accommodation paid.

Ms Creasy said women in Northern Ireland were being denied a basic human right and the new scheme was a step forward. “Today we also pledge to keep standing with them until they have equal access to abortion services in Northern Ireland itself,” she said. “Our sisters need to have their human rights to be upheld and we won’t give up until they have so.”

On Tuesday, the UK’s supreme court will hear a case to overturn the restrictions on abortions in Northern Ireland on the grounds that the laws breach human rights.