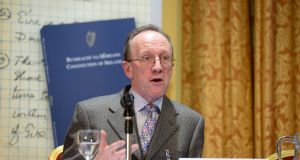 Repealing the Eighth Amendment will not take the Republic back to the constitutional position on abortion that existed prior to its enactment in 1983, a conference has heard.

Rather it would put the right to life of the unborn in a weaker position constitutionally than had the “pro-life” referendum never taken place, Prof Gerry Whyte of TCD’s Law School s said.

Repeal of the Eighth Amendment would mean an “explicit decision of the people to remove constitutional protection from the unborn”, he said.

“In my opinion, that factor has to be taken into account by both the Oireachtas and the courts in evaluating what might constitute an objectively justified interest in limiting the constitutional rights of the mother.

“In particular, I contend that it means that the Oireachtas would not have the same freedom of manoeuvre post any deletion of the Eighth Amendment as it had in 1983.”

Prof Whyte was speaking a conference in Athlone on “Abortion, Disability and the Law”. It was jointly hosted by a UK Catholic academic group the Anscombe Bioethics Centre and the Consultative Group on Bioethics of the Irish Catholic Bishops’ Conference.

Prof Whyte said that in his opinion deleting the Eighth Amendment from the Constitution “removes all constitutional protection from the right to life of the unborn”.

He suggested that “a more limited objective of removing the equivalence between the right to life of the mother and that of the unborn could be achieved by simply repealing or replacing the word ‘equal’ in the existing text”.

In his opinion, it was not possible to argue, post deletion, “that the right to life of the unborn still enjoyed some residual constitutional protection by virtue of other provisions of the Constitution”.

He also said no presentation to the Citizens’ Assembly or the Joint Oireachtas Committee on the Eighth Amendment had adequately addressed the argument that “a popular decision to withdraw constitutional recognition from the right to life of the unborn would tie the hands of the Oireachtas (and the judiciary) when it comes to the question of protecting foetal life”.

Professor Patricia Casey of Dublin’s Mater Hospital told the conference that there were few studies on the effects of abortion on women’s health but those available indicated that it did not benefit a woman’s mental health. To suggest it was otherwise was not evidence based, she said.

Quoting from a study published in the Australia New Zealand Journal of Psychiatry in 2013, the Professor Emeritus of Psychiatry at UCD said it found that “there was consistent evidence to show that abortion was not associated with a reduction in rates of mental health problems”.

A 2005 study found that “abortion for foetal abnormality is associated with persistent psychological distress”, she said. A 2015 study found that in such cases “women who terminated had significantly more despair, avoidance and depression that those who continued the pregnancy,” she said.

In a question and answer session, Prof Casey said there was “no evidence that abortion prevented women who were pregnant dying by suicide” and that such women who did take their own lives suffered from “untreated mental illness.” She had dealt with one such patient who suffered “severe depressive illness,” she said.

The most dangerous time in any woman’s life was “postpartum” (after birth), she said, while “the safest is the early weeks of pregnancy”.

Committee members “should go home, go to bed, go to the pub. It’s a pointless exercise,” she said.