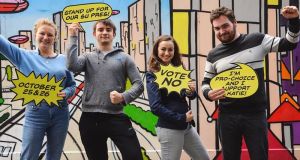 UCD Students’ Union president Katie Ascough (second from right) in a promotional picture released as part of her campaign against an impeachment bid.

Campaigns and communications officer Barry Murphy, postgraduate officer Niall Torris and education officer Robert Sweeney will campaign for the Yes side in the impeachment referendum this week.

The three officers are part of the five person sabbatical student union team, which includes Ms Ascough. They are taking annual leave from their positions to campaign .

Welfare officer Eoghan Mac Domhnaill is remaining at the UCDSU offices during the campaign, but said he supported the decision of the three officers.

In a statement Barry Murphy said the case to impeach Ms Ascough “is because she has repeatedly gone against a strong mandate our union holds (a vote by the student body) to fight to repeal the Eighth Amendment.”

The State will next year hold a referendum on the Eighth Amendment which places an equal constitutional protection on the right to life of the mother and her unborn child.

“This is not a bullying campaign. To use that word here is disheartening to those who are actually bullied. This is not because Katie is pro-life. It’s because of a series of actions where she has allowed her personal beliefs to affect her role” Mr Murphy said.

Voting in the campus referendum will take place this Thursday and Wednesday in UCD. The impeachment referendum was triggered by a petition signed by over 1,200 students.

Ms Ascough is a prominent anti-abortion activist, and the daughter of Tom Ascough, who sits on the Iona Institute’s board of directors.

During her election campaign last March Ms Ascough stated she would delegate any issues relating to the topic of abortion to the campaigns and communications officer during the year.

The controversy began following Ms Ascough’s decision to remove a page in the students’ union freshers’ magazine that contained information on abortion services abroad, and reprint the magazine.

The information that was removed from the Winging It magazine included the prices of abortion during different gestation periods in other countries, and a paragraph relating to how to obtain an abortion pill to use in Ireland.

While it is lawful to provide information in Ireland about abortions abroad, it is subject to strict conditions. For example, detailed information about abortion abroad may only be made available by doctors, specific agencies or by individual counsellors.

The decision to remove the information, which required reprinting the annual guide, is estimated to have cost the union between €7,000 and €8,000.

In a video posted on Ms Ascough’s Fight4Katie campaign page on Sunday evening she defended her decision to reprint the handbooks.

“Contrary to some accusations against me I have not tried to impose my views on other students” she said.

“The student union was publishing a college guide for incoming students, and I knew that it contained abortion information, but respecting the pro-choice mandate of the union, I delegated the sign off of this book to another union officer. It was only when the books were printed and delivered in the office that another staff member said to me some of the abortion information might be illegal,” she said.

“So at that stage myself and the union’s COO [chief operating officer] sought legal advice from the union’s long standing lawyer ,who raised some serious concerns and advised that we were risking personal criminal convictions and were facing up to €4,000 fines each, for myself and my team members, volunteers, and staff members”.

“Is it fair to impeach someone for following legal advice, and for not risking a personal criminal conviction for themselves and others?” she said.

Mr Torris said he took the decision to officially campaign for Ms Ascough’s impeachment in “the interests of our union which has become somewhat of a laughing stock in recent times”.

Ms Ascough and the official Fight4Katie campaign group did not respond to requests for comment on the decision of the three officers to campaign to impeach Ms Ascough.