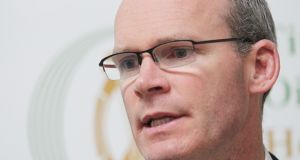 The Government will provide €1 million for new research on sexual abuse and violence in Ireland “if it is the right thing to do”, according to Minister for Foreign Affairs Simon Coveney.

He said the money had not been provided for in Budget 2018, but if the Government decided it is right to prioritise spending on research “that will be done”.

He rejected claims by Sinn Féin deputy leader Mary Lou McDonald that Taoiseach Leo Varadkar’s “open mind” on the issue had “closed shut” in relation to spending €1 million to update the outdated 2002 Savi (Sexual Abuse and Violence in Ireland) report.

Last week in the Dáil, the Taoiseach told Independent TD Catherine Connolly that Government departments had said they were satisfied with the statistics and information they had, and would prefer to spend the money on services or additional shelters and housing. But Mr Varadkar said he had an open mind on the issue and if department staff believed expenditure on an academic analysis or statistical report should be prioritised over alternatives, he would be happy to consider it.

At the Fine Gael presidential dinner at the weekend he said funding for legal aid would be a priority.

Ms McDonald said departments were getting their information from the Rape Crisis Network, but it had stated that it could no longer publish such statistics because of funding cuts. She claimed the Taoiseach was engaged in a “cynical attempt” to “pit two vital pillars of combating sexual violence against each other”.

She said “it should not be a case of one or the other because we clearly need both” because research was essential to guide and shape responses and policy and it was “not some bauble or concession” for researchers.

The 2002 Savi report had detailed data and depicted “the entire scope of sexual violence in Ireland”. Since it was now 15 years-old it had to be updated, she said.

Ms McDonald made a renewed attack on the Government’s strategic communications unit and said the €5 million prioritised to fund “the Taoiseach’s vanity project” could have funded five Savi reports.

Rejecting her claims, Mr Coveney said the Taoiseach had merely pointed out that if €1 million was to be spent in relation to sexual abuse and violence, “regard must be had to the most acute current priorities”.

He highlighted Eurobarometer, the survey produced by the European Commission, and other EU studies which provided data across all 28 EU states.

Mr Coveney said the Government had to consider if it was to allocate fresh resources that were not provided in the budget. He would take his advice from the experts. “If trying to find €1 million for this research is the right thing to do, the Government will do it.”