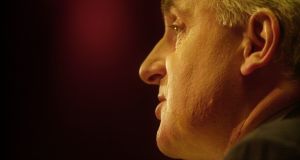 Former taoiseach Bertie Ahern has said there is a ‘possibility’ of a united Ireland by the end of the decade. File photograph: Dara Mac Dónaill

Former taoiseach Bertie Ahern has said there is a “possibility” of a united Ireland by the end of the decade.

The former Fianna Fáil leader said a Border poll for Irish unification is “inevitable” in the next 10 years, but that if the vote was to happen today “it would fail”.

Mr Ahern was speaking on LBC radio station on Saturday morning, when he was asked whether the unification of Ireland would happen in his lifetime.

Mr Ahern said the issue of a Border poll is “growing all the time” and that it has been brought “centre stage” since the Brexit referendum in 2016.

“It is now fairly well 50:50 in Northern Ireland in terms of people that want to see unification,” he said.

Mr Ahern said two things would have to happen before any Border poll on Irish unity – preparatory work on how a united Ireland would function in terms of policing and criminal justice systems and also allowing the newly formed Northern Irish Executive run for a number of years.

“The institutions in Northern Ireland, which have just recently been reset up, have to run for a sustainable period to show that they can work together across parties and across various religious divides and that they can operate together.”

The former taoiseach said that while a Border poll is inevitable, the outcome of that vote would be based on “the case that’s made” following qualitative and analytic work. He said if a poll was taken today it would not pass due to financial issues and also because “people are not prepared anymore to see coercion of unionists or loyalists into a united Ireland until there’s a comfort zone established where people see that everyone could work together”.

Separately, Mr Ahern said if Sinn Féin had run more candidates in the latest general election, they “probably would have got 11 seats more”.

He said at the moment it looks like attempts will be made for Fianna Fáil, Fine Gael and the Green Party to form a coalition.

“My own view, I think they would be far wiser to broaden that and bring in some of the smaller parties, the Social Democrats and maybe some of the rural Independents,” he said.

“I think if they keep it just to the three parties, they might be making a problem for themselves in the future.”