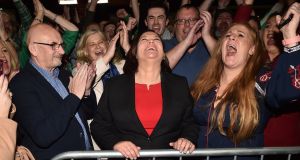 Ulster Unionist Party leader Steve Aiken made a play on a purported Chinese curse when reacting to the exaltation of Sinn Féin supporters after the party’s surge in the general election.

“Our neighbours in the Republic of Ireland are living in interesting times,” he said.

Interesting, too, in Northern Ireland.

The DUP characterised the result as a “protest vote” about issues such as housing and health, rather than a drive for a united Ireland.

Just in case there was any doubt, Mr Aiken in his statement went on to translate “interesting” times to be “worrying” times.

He wondered how there could be a coalition government “between a centre-right party” and Sinn Féin, “a hard-left party with a less than transparent relationship with its violent past, and whose economic and social policy influences are those of Venezuela and Cuba”.

But he didn’t express any concern about how the prospect of Sinn Féin in government would push the issue of a Border poll further up the agenda.

Already Sinn Féin’s Michelle O’Neill, Deputy First Minister in Stormont, was agitating for it. Will we soon see Mary Lou McDonald issuing the calls, possibly as tánaiste or taoiseach, rotating or otherwise, in Leinster House?

Taoiseach Leo Varadkar, he said, in insisting Sinn Féin should be back in the Northern Executive “had validated and sanitised the party of the IRA”.

The DUP had, by going back into the Executive with Sinn Féin, guaranteed that now “Ireland North and South is blighted with their growth”.

“Sadly it is those they partnered into government that are on the move, singing IRA songs,” added Mr Allister.

“The only comfort is that a triumphalist Sinn Féin in the Republic gives unionists more reason to be opposed to an all-Ireland, but it should give the lead party of unionism pause for thought.”

The DUP and UUP have basically been saying “move on, nothing to see here” in response to the weekend’s results, but Mr Allister painted a much different picture.

First Minister and DUP leader Arlene Foster played the “keep calm” line, saying she was not at all “unnerved” by the election result.

“Nothing has changed as regards Northern Ireland’s position within the United Kingdom,” she told the BBC.

“We should remember that when it comes to issues like Border polls, it’s for the Secretary of State to decide whether anything has changed within Northern Ireland in relation to whether people want to leave the United Kingdom or not.

“So nothing has changed as regards that.”

Ms Foster is of course correct. It’s for Northern Secretary Julian Smith to decide when and whether the statistics point to a possible majority for a united Ireland.

With recent elections having unionists at about 43 per cent and nationalists at about 39 per cent, and with Alliance on about 17 per cent in the middle, there is no current indication that a Border poll would result in a 50 per cent plus one vote in favour of a united Ireland.

But with continuing demographic change, the “civic nationalism” campaign for a Border poll, nationalist disenchantment over Brexit and now the prospect of Sinn Féin in government throughout the island, this has to be a concerning time for unionism.

Mr Allister may be reflecting the unionist mood more accurately than Ms Foster and Mr Aiken on this occasion.