Miriam Lord: New TDs have a great welcome for themselves 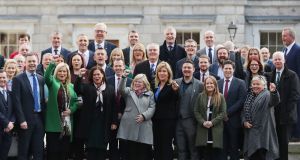 ‘The Sinn Féin leader was busy making as many grand entrances as she possibly could with her 36 strong Dáil team.’ Photograph: Niall Carson/PA

The man and woman who want to be Taoiseach – not at the same time, although plenty would pay good money to see (or not to see) Micheál and Mary Lou rotating on the national stage – were under intense media scrutiny on Thursday in Leinster House.

The Sinn Féin leader was busy making as many grand entrances as she possibly could with her 36 strong Dáil team. She wasn’t put out during her big photocall on the plinth when a member of the public shouted “Up the Women!” only for a scurvy hack in the car park to shout “what about up the RA!”.

This was all about the optics. It was all about emphasising Sinn Féin’s “appetite for change” in a change-centred Ireland where there is now a deep thirst for change to reflect the overwhelming mood for change from the doorsteps in these changing times.

Mary Loud McDonald, leading her colleagues in an exercise at cornering of the word “change” for Sinn Féin in the weeks to come, was doing what she does best. Busy being Mary Loud McDonald, staking Sinn Féin’s claim as the Custodians of the Change. This limelight was very welcome.

Inside the building, in the basement of the Leinster House 2000 annex, the Fianna Fáil leader was in a four-hour, marathon parliamentary party meeting where everyone emerged in unusually unanimous agreement that the party will not share government with Sinn Féin under any circumstances. They also think their leader is fabulous.

There were no windows in the room. “Jaysus, it was a bit stuffy there, I don’t mind telling you. Like you know, there were a fair few lads in the room and . . . yes . . . oh, it was stuffy alright, to be honest,” croaked one of the participants afterwards.

Lots of passionate speeches. Though we hear the assembled Fianna Fáilers were disappointed when Barry Cowen, who had been expected to deliver a powerful speech against shoring up the Shinners, did not perform to par because he forgot his reading glasses.

“I was hoping he was going to blow the doors off,” sighed our informant, although this may have had more to do with ventilation than oration.

So it was a tough and tiring afternoon for both leaders, if for different reasons.

Not so for the Taoiseach, Leo Varadkar, who looked very relaxed when he rolled into the entrance hall around teatime in search of Room 4 on the main corridor, where he had to sign on the members’ roll for the 33rd Dáil.

Leo, along with (still) Minister for Foreign Affairs Simon Coveney and (still) Minister for Finance Paschal Donohoe, earlier enjoyed a leisurely lunch in The Vintage Kitchen restaurant on Dublin’s Poolbeg Street. A great spot, but given its close proximity to the Irish Times building on Tara Street, not the best choice if they didn’t want to be noticed.

The Irish Times books editor, Martin Doyle, was at the next table having lunch with his brother. Paschal is one of his regular book reviewers. Quick thinking Martin got the pile of economics books clogging up his desk sent over for the Minister, thus saving on the cost of posting them out.

Oh, joy. We’ll have lots of reviews to look forward to, now that Paschal is going to have a lot more time on his hands. Then again, with a new/old government formation of FF/FG taking off with the bookies, we may have to wait on his verdict on the latest from Thomas Piketty.

Maybe that’s why the Laddies Who Lunch seemed in such mellow mood. A change is as good as a restaurant . . .

Other diners from Tara Street report that the senior Ministers enjoyed a few glasses of wine with their meal. There was no sign of stress or tension between them as they discussed the election campaign and possible future developments.

First with the notions

When the new TDs began filtering into Leinster House at the beginning of the week, the ushers and front of house staff were armed with little booklets featuring head and shoulder photos of the members of the 33rd Dáil.

It’s very much early days and the first-timers are still finding their bearings, but it’s amazing how soon some of them reach the dreaded “Do You Know Who I Am” stage in the development of bumptious TDs. The vast majority of them will be fine, but inevitably a few will be added to the existing cohort of insufferables.

The good thing for them though is that they will never know this because they think they are fantastic.

Notions, and the rapid succumbing to same, are not confined to any one party. Best for the staff to get those names right as quickly as possible to prevent unnecessary upset to the recently elevated. It won’t take the people who work behind the scenes long to know who the difficult/high-handed ones will be. It often comes as a surprise to find that a TD who comes across as very agreeable in public is not so highly regarded by Oireachtas employees who don’t like being treated as the hired help.

An exciting journey of discovery lies ahead.

Fashion Item of the Election award

London Fashion Week kicked off on Friday so we have decided to hand out a Fashion Item of the Election award. The result was in no doubt until Thursday, when former Sinn Féin leader Gerry Adams turned up at Sinn Féin’s family hooley in Leinster House looking like the eccentric uncle who turns up unannounced and won’t be told what to do.

In sartorial keeping with the political word of the day, at one stage he even managed to Change. Gerry’s Belfast boho look was enhanced early in the proceedings by a dusky pink roll-neck sweater. But by the afternoon he was walking around Leinster House wearing a black sweatshirt from a cafe in Santa Fé featuring an image of Mexican revolutionary, Emiliano Zapata.

However, despite this last ditch strong challenge, we feel the award must go to Green Party leader Eamon Ryan’s Donegal tweed scarf. The multi-coloured muffler featured everywhere he went, flying off in all sorts of mad directions but never falling off. For sheer staying power and lovely use of colour, Eamon’s scarf gets the nod.

Here’s a novel explanation for the huge jump in Sinn Féin’s vote which may interest people who grew up listening to daily news reports of IRA atrocities and who, as the years went by and broadcasting restrictions eased, despaired of the mealy-mouthed and empty formulas recited by SF spokespeople smoothly sidestepping having to unequivocally condemn the murders of ordinary Irish people by thugs they still lionise as heroes.

It was overheard in a pub before the election as a group of workmates had a lively discussion about the rise of Sinn Féin in the opinion polls. One of them pointed out that the IRA’s murder campaign, always resoundingly rejected by the repulsed majority of Irish citizens at the time, is ancient history to younger voters. They are much more concerned, and who would blame them, with the problems of the here and now and how successive FF and FG governments have failed them.

“I blame Derry Girls,” said one man, not in the first flush of youth. He argued that young people have no real reference point to those awful days in the North. But they have watched and loved the hit Channel 4 TV series Derry Girls, that genius black comedy set against a backdrop of sectarian violence in 1990s Derry. So, yes, the Troubles happened, but they were kinda funny and edgy and great crack too.

It’s the Derry Girls effect. That was his theory.

Housing, homelessness and health are more likely the reason, allied to a burning desire to punish the governing parties and a refreshing willingness to explore a left alternative.

Still, this explanation may come as a comfort to all dogged old fossils who – while similarly hungry for change and a new way of thinking – refuse to forget.

Best name of the new intake which isn’t actually their name: There’s the “GAA fella from Mayo” (Alan Dillon, FG). Recognition here depends on knowledge of inter-county football, which is pretty high around Leinster House.

And then there’s “the Fianna Fáil child, no not Jack Chambers” young lad. That would be 22-year-old James O’Connor, who took sitting FF TD Kevin O’Keeffe’s seat in Cork East.

However, the person who will have to work the hardest to shake off her current moniker is Patricia Ryan, Sinn Féin’s new TD for Kildare South. She made the news when it emerged she missed the last stretch of the campaign because she was in Lanzarote, enjoying the treat her children brought her for Christmas.

As the party’s collection of first-timers swarmed around on Thursday, everyone was calling her “The One Who Went On The Holiday”.

Days of the Kerry dances

Most hotly anticipated event of the new Dáil when it opens again for business on Thursday? That would be the arrival of the Healy-Rae organisation in Kildare Street. In 2016, the TDs Michael and Danny Healy-Rae arrived in style from Kerry to put manners on “the people above in the Dáil”.

They brought the traffic to a standstill, taking over the road outside the main gates. The family – TD brothers, assorted Healy-Rae councillors and a clatter of organisation stalwarts – held an impromptu céilí, with Danny giving it socks on the button accordion and Michael belting out a mighty step dance on the bonnet of a jeep.

How are they going to top that performance?