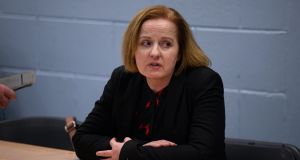 Election 2020 has been touted as a vote for change but has done little to increase female representation in the Dáil, Women for Election chief executive Ciairín de Buis has said.

She said the Irish political system was so far behind those of others countries that one of its successes this time around was that for the first time every constituency had a female candidate.

While all the counts have not yet been completed it looks like “in or around” the same number of women will be elected as in 2016 when a record 35 female TDs, 22.3 per cent of the seats in the Dáil, were elected.

By Monday evening, when 31 women and 102 men had been elected, Women for Election predicted a 1 per cent rise in female representation.

The independent organisation supports and trains women across the political spectrum for electoral politics.

The Labour Party fielded nine female candidates out of 31 and will have no woman TD in the next Dáil.

Ms de Buis said that while the outcome is disappointing “it was inevitable given the lack of women put forward for election by the three large parties”.

A third of Sinn Féin’s 42 candidates were female, while women accounted for 31 per cent of Fianna Fáil’s candidates and Fine Gael fared worst with woman accounting for just 30 per cent of its candidates.

“Parties need to develop candidate selection processes that look to outside traditional networks like the GAA,” she said.

Ms O’Connor said that “in rural areas, women made up just 22 per cent of candidates as opposed to 44 per cent in urban areas”.

Ms de Buis said the larger parties could learn from their smaller counterparts who had a much more balanced line-up.

Social Democrats co-leader Catherine Murphy said that “sometimes when you have a 50:50 dynamic you have a different culture”.

She added that incumbency is a difficulty and often the female candidate is second on the ticket.

Fianna Fáil and Sinn Féin have been contacted for a response to the figures.

The last election was the first with gender quotas where at least 30 per cent of candidates had to be female or else a party’s State funding could be cut by 50 per cent. The target will rise to 40 per cent in 2023.

However, Ms de Buis said said the large parties regarded the 30 per cent figure as a target rather than a minimum requirement.