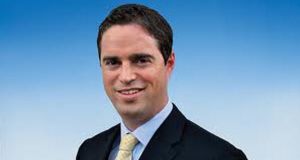 Martin Heydon (41) has been the the chairman of the Fine Gael Parliamentary Party since June 2016.

A native of south Kildare with a background in farming, Heydon joined Fine Gael in 2008 and was elected to Kildare County Council at the 2009 local elections but left for a Dáil seat in 2011.

He was the first Fine Gael TD to be elected in the Kildare South constituency since Alan Dukes lost his seat in 2002 and was returned on the first count in 2011 .

He was re-elected in the 2016 general election, topping the poll in Kildare South.

His promotional video, in which he travelled his constituency in a De Lorean, highlighting improvements he played a role in, did not harm his vote and earned him the nickname “Marty McFly”.

This time out he took the second seat in the constituency behind Sinn Féin’s Patricia Ryan.

He served as chair of Fine Gael’s Internal Committee on Agriculture and Rural Affairs between 2011 and 2016.