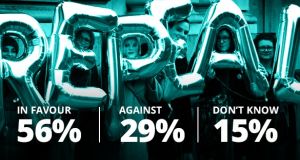 This is the answer given by a sample of people who were asked: will you vote to change the Constitution so the Government can legislate for abortion in request up to 12 weeks?

A clear majority of voters say they will back the repeal of the Eighth Amendment and support the introduction of abortion on request up to 12 weeks into a pregnancy, the latest Irish Times/MRBI opinion poll finds.

As the campaign begins in advance of an expected summer referendum, today’s poll shows that the repeal side has an almost two to one lead over those who wish to retain the amendment.

Poll respondents were told that it was likely the Government would seek to legislate for abortion to be available on request up to 12 weeks. They were also told that in order to legislate for this, the Constitution needed to be changed in a referendum.

A clear majority of all voters – 56 per cent – said they would vote in favour of the constitutional change, with 29 per cent not in favour. Fifteen per cent said they did not know or offered no opinion.

When undecided voters are excluded, 65 per cent favour repeal and abortion being allowed up to 12 weeks while 35 per cent do not.

Among political parties, support for the 12 weeks proposal is lowest among Fianna Fáil supporters, but still attracts almost half (49 per cent) of the party’s declared voters.

When voters were asked if their view on abortion being more widely available had changed in the last year, almost a fifth (19 per cent) said that were now more open to the idea. Just 3 per cent said they were less open to wider availability of the procedure, while nearly three-quarters said their views had not changed.

Asked why they had changed their approach over the last 12 months, respondents cited influences such as thinking a woman should have the right to choose (12 per cent), the news media (12 per cent), having become more informed (8 per cent), that they were “considering it under circumstances such as rape and fatal foetal abnormality” (22 per cent), the availability of abortion pills/women going to England (3 per cent), and personal experience or that of a relative or friend (6 per cent).

Voters strongly backed a woman’s right to choose to have an abortion (64 per cent), though (57 per cent) said they had “reservations” about the 12-week proposal. Nonetheless, they said it was a “reasonable compromise”.

Nearly a third of voters (30 per cent) said that they believed abortion was wrong and should not be made more widely available.

The poll was conducted on Monday and Tuesday among a representative sample of 1,200 voters aged 18 and over in face-to-face interviews at 120 sampling points in all constituencies. The margin of error is plus or minus 2.8 per cent.

Meanwhile, Taoiseach Leo Varadkar has said he will make his position clear after a special Cabinet meeting on Monday night, which is expected to give the formal go-ahead for a referendum and to decide to insert a clause enabling the Oireachtas to legislate for the termination of pregnancy.

The Dáil debate on the Oireachtas committee’s report on the Eighth Amendment – which recommended repeal and that abortion be available up to 12 weeks – continued last night. A majority of both TDs and Senators have now declared in favour of repealing the amendment.