Repeal side takes early lead after round one of abortion campaign 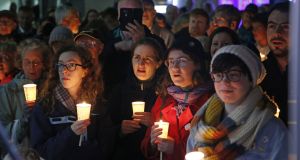 “It is hard to escape the conclusion that the broader anti-abortion campaign has been out-organised and out-prepared and – so far anyway – out-thought by their opponents.” Photograph Nick Bradshaw

The starting gun on the summer’s abortion referendum has effectively been fired, and today’s poll shows that the Repeal side has an early and substantial lead.

It’s not a game, of course, or a race: it is a deeply serious and significant process under which this country must answer difficult and complex questions by a majority vote of its citizens. These questions centre on women’s rights, on when life begins under the law and the protections pre-natal life should have, and how far the legal power of the state should extend into women’s reproductive lives. Whatever the result, the consequences for Irish people now and in the future will be profound.

But it’s a political campaign now, whose end-point is a binary choice for voters. Yes or no. Repeal or retain. One side will win and the other will lose.

At the start of a long four months or so, Repeal is winning. Not just winning, but winning clearly. Among voters who declared a preference, Repeal is winning by 65 per cent to 35 per cent. When all voters are included, the breakdown is 56 per cent in favour of repeal, 29 per cent against and 15 per cent undecided.

The numbers are not decisive, of course; at this point, they cannot be. If there’s one thing we have learned from referendum campaigns in the past it’s that the position you start from is not necessarily the position you’ll finish with. But it presents a significant change in the public’s views towards the desired availability of abortion, all the same, and that’s a really important change.

Previous Irish Times polls have asked questions on this subject in several different ways but they have all built up a pretty consistent picture. The first thing they have said is that there is a big majority in favour of liberalising Ireland’s law on abortion. The second is that some voters are cautious about the extent of that liberalisation and are uncomfortable with unrestricted access to abortion.

Today’s poll shows that enough of this crucial third group regard the Government’s emerging 12 weeks proposal as an acceptable bridge between the two positions described in all the previous polls. Clearly, a lot of people have changed or are changing their minds, and that process will continue as the public engages with the campaign.

These numbers say that the traffic is in one direction so far. Three-quarters of people say that their attitude to the issue of abortion has not changed in the past year. But almost a quarter says that their views have changed. Of these, the vast majority say that they are “more open to the idea” of abortion being more widely available in Ireland than before. This is why the pro-choice side are ahead: they have been winning the argument.

Anti-abortion campaigners say there are reasons for this. They cite a widespread media bias (though that will become less important once broadcast requirements for balanced coverage come into operation during the campaign). They say people are only switching onto the issue now.

But observing the campaign so far, it’s hard to escape the conclusion that the broader anti-abortion campaign has been out-organised and out-prepared and – so far anyway – out-thought by their opponents.

Campaigns matter, and this will be a long campaign. All sides – and the politicians caught in the middle – are appealing for a respectful and reasonable debate. What they really means is: as long as you agree with me. Everyone says they want a debate based on the facts: they mean that facts that suit them.

Given all previous research, and the questions in today’s poll that explore voters’ attitudes, it is safe to assume that at least some of the middle ground now leaning in favour of the 12-week proposal is “soft”. That’s not to say they will swing back towards the anti-abortion side of the argument. Rather it is to say that the pro-choice side will have to work to keep them. Campaigns, after all, are also unpredictable.

As this campaign begins, it remains an important fact that the swing voters in the middle ground are the ones who will decide the campaign. If this is a statement of the obvious, you’d never know it from the ways campaigners on either side conduct themselves. Shouting insults at the other side and sloganeering in their own echo chambers is, when you think of it, a curious way to go about winning over undecided, wavering or barely converted voters.

First round to the repealers. But there’s a long way to go.