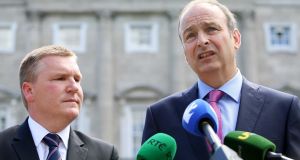 Fianna Fáil finance spokesperson Michael McGrath has said he does not support party leader Micheál Martin on the removal of the Eighth Amendment with access to abortion up to 12 weeks. Photograph: Sam Boal/RollingNews.ie

Fianna Fáil leader Micheál Martin strongly defended his decision not to inform his TDs and Senators of his support for repealing the Eighth Amendment and allowing abortions up to 12 weeks into a pregnancy.

Addressing a meeting of the parliamentary party, Mr Martin said he accepted there were concerns and some anger about his position and his decision to inform the Dáil before Fianna Fáil members.

Mr Martin outlined how he came to a position of supporting the removal of article 40.3.3 of the Constitution and allowing for terminations up to 12 weeks insisting this was his personal view, rather than a party position.

The Dáil, he said, was the correct forum to do so as it reached a public audience, his remarks were uninterrupted and gave him the space to outline his rationale for how he came to his position.

Mr Martin faced some criticism from TDs and Senators at the meeting for the decision not to inform his party first.

Carlow-Kilkenny TD Bobby Aylward said he had been contacted by members across the country who were disappointed and angry at Mr Martin’s views.

However, he said this was nothing to do with Mr Martin’s leadership, saying he was a “wonderful leader”.

Cork East TD Kevin O’Keeffe said he wanted anti-abortion members of the party to have the same entitlement to appear in the broadcast media during the referendum campaign as pro-choice TDs and Senators.

Senator Diarmuid Wilson told the meeting members had felt intimidated and bullied by party headquarters on abortion and other issues.

Carlow-Kilkenny TD John McGuinness also said he felt decisions of the party were being dictated by unelected officials and that he had a right to challenge those people and their decisions.

Tipperary TD Jackie Cahill told the parliamentary party he had spoken to Independent TD Mattie McGrath, who had known details of previous meetings held by the party. Mr McGrath, a former Fianna Fáil TD based in Mr Cahill’s constituency, had “urinated on Fianna Fáil” when he had the chance and members needed to be reminded of that fact, he said.

Roscommon-East Galway TD Eugene Murphy told the meeting he had received in excess of 400 emails on this issue in recent days. Eighty per cent of them were advocating against any change to the current abortion regime.

Meath West TD Shane Cassells said the media and the party’s political opponents would use a divide within Fianna Fáil as a “stick to beat us with” and “savage us at every opportunity”.

He said it was essential that Fianna Fáil remained united and did not give Fine Gael and others “the delight” at the sign of division. He told the meeting conversations on this issue needed to take place within the parliamentary party and nowhere else.

Fianna Fáil members needed to be prepared to die for each other, he added, insisting anything less is not the foundations for a solid team.

Laois TD Sean Fleming outlined his belief that the discussion under way within Fianna Fáil would prove to be a good thing for the party.

There are similar differences within Fine Gael, he said, but Fianna Fáil was being honest and upfront about the divisions on this matter.