Director and writer Martin McDonagh, whose second home was in south Connemara, has been honoured for his success at the Baftas using inspiration from his winning film, Three Billboards in Ebbing, Missouri. Video: Joe O'Shaughnessy 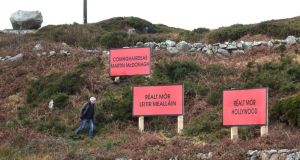 Martin McDonagh has long been celebrated in his second home in south Connemara, and now a Gaeltacht community has erected three billboards to honour his success at the Baftas.

The signs, inspired by McDonagh’s Three Billboards Outside Ebbing, Missouri, which won five British Academy film awards in London on Sunday, were hammered together over the weekend just outside Leitir Mealláin.

The London-Irish director and playwright and his brother, John Michael, spent family holidays in the Ceantar na nOileán, where an archipelago of former “islands” are linked by a chain of bridges and causeways.

John Bhaba Jeaic Ó Conghaíle, the curator of Leitir Mealláin heritage centre, has displayed a photograph of McDonagh since the success of his Leenane trilogy of plays, in the mid-1990s, and his first feature film, In Bruges, from 2008.

He said he visited McDonagh’s parents, who live in An Spidéal, to tell them about the billboards, and they were delighted with the community response.

Mr McDonagh’s Bafta-winning film is nominated for seven Oscars, and Mr Ó Conghaíle hopes that next month Leitir Mealláin will be able to mark success there too.

Frances McDormand, who won the best-actress Bafta for her role in Three Billboards, has expressed her delight that activists all over the world have been inspired to use billboards, including campaigners seeking justice for victims of the Grenfell Tower fire in London.

1:50 Everyone in Ireland to get Covid-19 vaccine by September, says Donnelly