‘Ashes and cinders’: A spontaneous combustion on Prussia Street

Lost Leads, 1970: Gardaí struggled to find the cause of a fire that ‘almost completely destroyed’ a woman’s remains 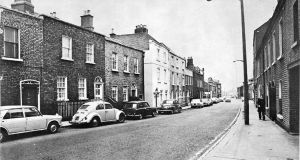 The walls of the front room of number 33 Prussia Street were covered in black, fat-laden smuts. Plastic flowers on a table in the centre of the room had been reduced to liquid and a television with a melted screen sat 12 feet from an armchair containing the ashen remains of Margaret Hogan.

The pensioner’s body had been burned, almost to the point of complete destruction, by a fire. However, her surroundings were, for the most part, untouched by flames.

Conor Brady, who would later become Editor of The Irish Times in 1986, was the first reporter on the scene on March 28th, 1970.

“The lady had been reduced to a little pile of ashes, it was just two little ankles sticking out,” recalls Brady, speaking to Lost Leads.

“There had been evidence in the room of the most intense of heat. The television set was turned into a blob in the corner. But there was very little evidence of fire - a bit of charring around where she was sitting.”

Mrs Hogan was a widow and lived alone. The 89-year-old, who required “a deal of looking after” was often visited at home by her neighbour, Kathleen Rigney.

On March 27th, 1970, Mrs Rigney called into Mrs Hogan’s house at about 4pm. She washed Mrs Hogan’s feet and hair before leaving her in her usual health, sitting in an armchair by the fire. At 9.30am the following morning, Mrs Hogan’s remains were discovered.

The damage caused to her body was extensive, “so much so, that a pathologist who carried out the postmortem on the remains said that he had never seen such complete destruction of human tissue,” reads the report Brady wrote for The Irish Times, published on May 12th, 1970.

Although the majority of her body had been turned to “ashes and cinders”, her two feet, from below the knees, had been undamaged. “Apart from the chair on which the dead woman had been sitting and a square yard of linoleum and some rug directly under the remains, there was no damage from the fire in the room.”

While it was clear Mrs Hogan had died due to burning, there were no apparent clues as to what started the fire. The room she was found in was five-sided, and a small coal fire had been burning in the grate when Mrs Rigney left the house. However, “no connection could be found between this fire and that in which Mrs Hogan died.” Self-immolation was ruled out.

The idea of “spontaneous combustion”, a forensic term used to describe a fire without an obvious cause, arose.

“Nobody believed me at the time in The Irish Times, and in fact, I had the greatest of difficulty in getting them to publish it,” says Brady.

“The news editor at the time was Gerry Mulvey and he was very sceptical about it. The thing went around the house for a few days before it got in. I remember Maeve Binchy got very excited by it - ‘Oh’ she said, ‘maybe she swallowed a cigarette!’”

Another person interested in the case was the Dublin city coroner at the time, the late Dr Paddy Bofin. When Brady called to ask his opinion, it emerged the doctor had a bet with another city coroner in the UK - the first to encounter a verified case of spontaneous combustion had to buy the other dinner. Following this case, Dr Bofin won the bet.

At the time, Dr Bofin concluded he had no doubt Mrs Hogan died from burning.

“The circumstances of the burning are unusual and would conform to what is called ‘spontaneous combustion’,” he said, adding that the term “does not mean that the fires are in fact spontaneous in origin, it’s simply a term carried on in forensic literature to describe a set of circumstances in which a person is burned to death without an obvious source for the fire.”

This is a point stressed by Brady: “The phenomenon reposes in the extreme degree of destruction - nobody seriously argues that people burst into flames on their own.”

In theory, a spark from the from the fire could have ignited Mrs Hogan’s clothes. However, the story notes, it was “difficult to visualise such utter destruction of human tissue arising from a fire of this nature, but it is even more difficult to conceive of such a fire reducing a body - bones included - to ashes and cinders without causing a conflagration in the room.”

The inquest, held on April 3rd, recorded death by burning, with the cause of the fire listed as “unknown”.

Door-to-door Garda inquiries, not published at the time, uncovered witnesses who reported seeing a ball of orange light near Mrs Hogan’s window. It was not clear what that could have been; the idea of a lightning strike or perhaps even ball lightning was proffered, though it may have been the glow of light of the fire.

Deaths by spontaneous human combustion (SHC) have been recorded for centuries, both in official inquests and often in literature. Brady, in his report in 1970, noted how the “modern origin” of SHC appeared in Charles Dickens’s Bleak House, in which the character Mr Krook burns to death.

A more recent Irish case of SHC involved the death of 76-year-old Michael Faherty at his home in Ballybane, Co Galway, in 2010.

Like Mrs Hogan, Mr Faherty’s body had been badly burned, yet “the court was told that no trace of an accelerant had been found and there was nothing to suggest foul play,” according to an Irish Times report on September 23rd, 2011.

Mr Faherty had been found near an open fireplace, which was, like the Prussia Street case, deemed not to have been the source of the blaze that engulfed him. Again, the only real damage was to the body and the floor beneath it.

Dr Ciarán McLoughlin, addressing the inquest, told the inquest he had never encountered a case like that of Mr Faherty in 25 years. SHC victims, he noted, were almost always near an open fireplace or chimney.

High blood alcohol, methane in the digestive system and static electricity are among the potential causes that have been used to explain the phenomenon.

A modern theory often used to describe the intense burning of SHC victims is the “wick effect”. Writing in the wake of the 2011 verdict, Irish Times columnist and emeritus professor of biochemistry at UCC William Reville summed it up by describing the human body as an “inside-out candle”.

The theory assumes an external source of ignition, which lights the person’s clothes. A person’s skin may then split, which releases subcutaneous fat, which acts like the wax in a candle. The fat then “soaks” into the wick (the clothing) and burning continues as it does in a normal candle.

Scientists remain sceptical of using the term “spontaneous human combustion”. Writing in the journal Forensic Science, Medicine and Pathology in 2016, Prof Roger Byard of the University of Adelaide’s Medical Science unit says researchers prefer “isolated body combustion”, as there is ‘‘always an external source of heat to ignite the body.’’

“It would seem reasonable to relegate ‘spontaneous human combustion’ to the category of urban myth,” he concluded.

This story is part of the Lost Leads series - a revisiting of lesser-known stories that have made the pages of The Irish Times since 1859. What can you find? Let us know on Twitter: @irishtimes or @deanruxton. For more information on subscribing to the archive, see irishtimes.com/archive