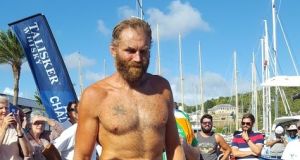 Damian Browne: Thanked his supporters for their encouragement.

A former Leinster and Connacht Rugby star has completed a solo Atlantic crossing by rowing 4,800km.

Damian Browne crossed the finish line of the Talisker Whisky Atlantic Challenge at 9.30pm Irish time. The former provincial rugby player set off upon this arduous and hazardous voyage on Thursday, December 14th, from the Canary Islands and finished in Antigua. The solo Atlantic rower had been at sea aboard his boat Gulliver’s Travels for nine weeks.

Browne paid tribute to those who had supported and encouraged him through difficult times during the crossing. “Thanks for all the help and support,” said a visibly tired but relieved rower as supporters cheered his achievement.

Browne took on the challenge as an extreme trial of his mental and physical strength. As a solo rower there was no support vessel or company, just himself and a boat laden with food to sustain the adventurer on his journey.

Two days ago, the 37-year-old – who has been posting videos and updates along the way – admitted he was feeling the inevitable effects of a perilous life on the ocean as he entered the final 100 nautical miles of this voyage.

“Last three mornings have been the hardest of the journey,” he said. “Imagine it: alarm summons you from the only semi-dry place on the boat, your bed. You pull on soaking wet shorts, base layer and wet suit top and climb out into the craziness. The ever-present howling wind and raging seas, now joined by frequent squalls and a**e sores back with vengeance. It won’t be sunrise for four hours . . . ignore the pain, ignore the impulses trying to weaken your resolve and just f****ng row.”

Browne is no stranger to that searching test of self. During his rugby career, in April 2016, he completed the Marathon des Sables in the Moroccan Sahara. This fulfilled a dream 12 years in the making. He then set his sights on his next perilous venture: the Talisker Whisky Challenge and discovered that more people have climbed Everest and been into space than have successfully rowed the roaring Atlantic Ocean. Browne has been in training for this extreme event for two years, which included rowing around the west coast of Ireland.

To see Browne come ashore on Facebook Live and how to donate to charity partners visit his Facebook page, Damian Browne – Atlantic Row. Here you will also glean an insight into his solo endeavour to date.

He is also rowing in an effort to raise funds for his chosen charities MADRA Dog Rescue & Adoption, Médecins Sans Frontieres and the Strong Roots Foundation School Rwanda.