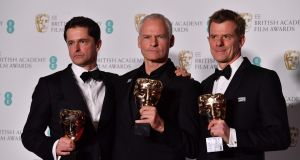 Martin McDonagh’s Three Billboards Outside Ebbing, Missouri has won best film at the British Academy of Film and Television awards (Bafta) at the Royal Albert Hall in London. The London-Irishman’s searing revenge drama took five awards. Guillermo del Toro’s fantasy romance The Shape of Water was in second place with three Baftas. The Mexican, as he has tended to do throughout awards season, won the prize for best director.

Frances McDormand, a red-hot favourite for the Oscar, took best actress for Three Billboards. Saoirse Ronan, nominated for Lady Bird, is now looking like an outsider for the biggest prize. McDormand noted: “I am thrilled that activists all over the world have been inspired by the set decoration of the three billboards and have taken to the streets and let it be a part of the positive discourse that is happening.” In recent weeks, campaigners such as those seeking justice for victims of the Grenfell Tower fire have erected billboards similar those put up by McDormand’s bereaved mother in McDonagh’s film.

Gary Oldman was a near-inevitable winner in the best actor race for his performance as Winston Churchill in Joe Wright’s historical saga Darkest Hour. He, thus, deprived Daniel Day-Lewis, nominated for Phantom Thread, of a final Bafta before this threatened retirement. “In those dark and uncertain days he held the line for honour and integrity and freedom,” Oldman said of Churchill. “For his nation and the world. I thank you Sir Winston. I thank you the Churchill family.”

Sam Rockwell took best actor for his turn as a racist cop in Three Billboards. The American actor has triumphed at all the big awards ceremonies so far. “This has been a magical journey. I’ve been a journeyman actor my whole life and I never dreamed of being in London celebrating with you,” he said at the podium.

Allison Janney, winner of best supporting actress for I, Tonya, also made reference to the host country. “I could simply murder a glass of water right now,” she laughed. “I want to clear up a little lie I’ve perpetrated for the last 35 years. I didn’t, in fact, graduate from the Royal Academy.”

The ceremony was hosted by a largely diplomatic Joanna Lumley. Taking over from long-time host Stephen Fry, she had earlier suggested that she would refrain from making any political comments, but she did mention the Times Up campaign, aimed at resisting sexual abuse, in a feisty opening monologue. “In one sense you’re all winners tonight. And in another sense, if you believe that you’ll believe anything,” she said.

Like so many awards ceremonies in the era of #metoo and #timesup, the Baftas were much taken up with conversations about the role of women in the industry. A large number of women – though not the Duchess of Cambridge – dressed in black and, as was the case at the recent Golden Globes, took feminist activists as their guests. Gemma Arterton, star of the stage musical Made in Dagenham, concerning the strike at Ford Dagenham in 1968, was accompanied by two of the machinists who took part in that industrial action. Andrea Riseborough arrived early with Phyll Opoku-Gyimah, co-founder of UK Black Pride. Before the ceremony, close to 200 British and Irish cinema professionals – Ronan, Kate Winslet and Carey Mulligan among them – signed a “letter of intent” laying out their demands for change. “Let’s make 2018 the year that time was up on sexual harassment and abuse. This is your moment too,” the letter concluded.

Winning best British film for Three Billboards, McDonagh, born in England, joked that, as he’s half-Irish, he wasn’t allowed to make a speech. His producer Graham Broadbent said: “We finished this film about a year ago about a woman taking on the establishment. It seems more timely now than it did then with Times Up.” Accepting the award later for best original screenplay, McDonagh added: “What we’re most proud of, in this Time’s Up year, is it’s about a woman that refuses to take any s**t anymore, played by a woman who always refused to take any s**t.”

The ceremony ended, as it always does, with Bafta’s most distinguished award: the Academy Fellowship. This year, the members finally got around to passing that gong in Sir Ridley Scott’s direction. Since his debut with The Duellists in 1977, Scott has been among the most prolific directors on the planet.

The awards from the British Academy are seen as firm pointers towards the Oscars. The two organisations share about 500 members, but, oddly, it has been four years since the same project won best film at both ceremonies. The last to do the double was 12 Years a Slave in 2014. Eight of the last 10 winners of best actress at Bafta have, however, gone on to win the Academy Award.

Ronan has some catching up to do.