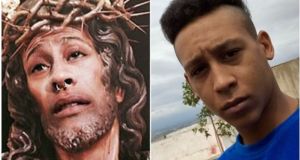 Superimposed Christ image and Daniel Serrano: a court in Jaén ordered Mr Serrano to pay €480 for committing a crime against religious feelings.

A man who posted a picture on the internet of his own face superimposed on the body of an image of Jesus has been fined nearly €500 by a Spanish court, provoking outrage and a slew of copycat images.

Daniel Serrano (24) posted the picture on the social media site Instagram in April of 2017. In it, his face, nose-ring included, appeared on the body of the Cristo de la Amargura, a large, wooden sculpture of Jesus.

A local religious brotherhood, whose members carry the sculpture through the streets of the southern city of Jaén every Easter, asked Mr Serrano to remove the picture, but he refused, prompting them to take legal action. The prosecutor in the case described the Instagram post as “a shameful manipulation of the face of the image”, which amounted to “manifest contempt and ridicule of the brotherhood with the intention of offending”.

On Wednesday, a court in Jaén ordered Mr Serrano to pay €480 for committing a crime against religious feelings. The prosecutor had originally called for a fine of €2,100.

“Obviously, I wouldn’t do it again, but this seems outrageous,” Mr Serrano told El Diario de Jaén newspaper. Under the image, Mr Serrano had written a tribute to deceased American rapper Tupac Shakur.

He said that he pleaded guilty on the advice of his lawyer. “She said it was best and that if I didn’t then I could be sentenced to pay much more,” he said. “I keep saying that at no point was it my intention to offend anyone.”

Mr Serrano said he does not have enough money to pay the fine and that after finishing working at a local olive farm in the coming days, he will be unemployed.

But the court’s decision appears to have inflamed the controversy further. Soon after the ruling, a number of social network users posted images with their faces superimposed on bodies of Jesus, in a show of support for Mr Serrano.

Among them was Joaquín Urias, a former jurist at Spain’s constitutional court, who wrote under his own picture: “Well, given that I think sentencing a young guy for photoshopping his face on Christ is an outrage, I offer my solidarity.”

The leftist Podemos party described the sentence as “absolutely disgraceful”, saying in a statement that “it’s as if Torquemada had come back to life and we had gone back to the times of the Inquisition”.

The party has started collecting money to help Mr Serrano pay the fine.