Policeman appears at disciplinary hearing over colleague’s tin of biscuits

‘Theft is theft’: Officer is accused of taking the biscuits and then lying about it 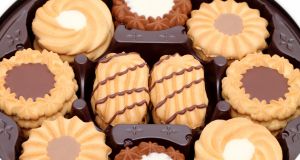 The officer took the biscuits, but was going to offer to share them out and also to offered to replace them, the tribunal heard.

A UK policeman has appeared at a disciplinary hearing, accused of taking a tin of biscuits belonging to a colleague.

Metropolitan Police constable Thomas Hooper, based at Kingston Operational Command Unit in south-west London, is said to have taken the medium-sized two-tier tin of biscuits from a storage cupboard on May 7th, 2016 and then given a false account about it.

Charles Apthorp, representing the Metropolitan Police, told a central London misconduct hearing that it was not just a matter of taking a tin of biscuits but whether his actions had amounted to a breach of professional standards.

Mr Apthorp said: “The appropriate authority’s perspective is that it is not the value of what was taken, it is what was done.

“It shows clear evidence of misappropriation of property. The officer was aware it belonged to someone else and the officer has taken it.”

Mr Apthorp said Mr Hooper would have been aware this was not appropriate conduct and had shown a “fundamental lack of integrity”.

Mr Hooper took the biscuits, but was going to offer to share them out and also to offered to replace them, the tribunal heard.

He denies two allegations of breaching standards of professional behaviour.

He is also accused of applying for a fixed penalty notice to be cancelled.

It is claimed the officer had been driving the van in response mode when there was no reason for it.

It is alleged that Mr Hooper later gave a false account of both incidents.

The driving incident had happened as the police officer had been taking a male patient from a mental health unit to the station, according to Mr Hooper’s counsel, Ben Summers.

Mr Hooper’s account is that the air conditioning in the van was not working and the vehicle was not fit to be in use as the patient had been sick and turned it into a health hazard, the tribunal was told.

Panel chairman Naheed Asjad said the public would be concerned about the value of the complaint about the biscuits, which was looked into by other officers and is now being heard at a misconduct hearing.

She asked Sarah Blake, who was an inspector at the time: “You have a sergeant and an inspector and a box of biscuits that have gone missing and the only thing you can come up with is to refer the matter to DPS (Directorate of Professional Standards)?”

Ms Blake replied that “the option of going to the DPS was because of the gravity of the incident”.

Ms Asjad pointed out that an offer had been made to replace the biscuits.

Ms Blake said: “By that time the biscuits had been eaten and, in my mind, theft is theft.

“How was he going to put the biscuits back?”–PA