Gusts of wind revealed US President Donald Trump famed comb over as he walked onto Air Force One on Friday 2nd February. 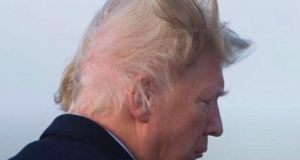 Is Donald Trump’s hair morphing into Marilyn Monroe’s dress moment? A hair-raising gust of wind as the president of the United States of America walked the plank – sorry, steps – to board Airforce One blew up more than any self-respecting comber-over might like. The hair-raising gust lifted the lid on a deadly combination: the pairing of a massive ego and a lack of self-awareness.

The video of Trump inadvertently exposing the truth of what lies beneath the orange manes went viral on Wednesday, with shares, memes, mirth and speculation about what was exposed on top of his head. It was a mesmerising sight, an ‘uggghhh’ moment. It wasn’t pretty.

The effects of this blast compare unfavourably with another famous gust; Marilyn Monroe’s white dress blowing up as she steps over a subway grate in Billy Wilder’s The Seven Year Itch.

The 20-second video clip, of Trump boarding Air Force One to head to Florida last Friday, captures the president from behind and exposes new battlelines in the US – the president’s struggle to keep whatever hair substance is on his head attached to the scalp.

There’s been a bit of analysis of the orange one’s hair, and it’s generally agreed it’s not a rug but overlong strands in a sort of tonsure, badly dyed, probably drugged, then teased into a comb-over and fixed with hairspray.

The somewhat blurry footage seems to confirm his daughter Ivanka’s gleeful description of her father’s bizarre rituals, as reported in Michael Wolff’s Fire and Fury: “An absolutely clean pate – a contained island after scalp reduction surgery – surrounded by a furry circle of hair around the sides and front, from which all ends are drawn up to meet in the centre then swept back and secured by a stiffening spray.”

“Expert” analysis from hair restoration folk apparently indicates previous hair transplantation to the front of his hairline and high powered topical medication or a laser therapy cap. The latter is a device that applies laser beams to the scalp to try to sprout hair growth; some say it would explain why Trump wears a baseball hat so often.

Unsurprisingly, the White House didn’t respond immediately to enquiries, but the man himself has previously referred to the hair question. During the campaign he promised to change his hairdo if he won. At a campaign event in Winterset, Iowa he said: “I would probably comb my hair back. Why? Because this thing is too hard to comb. I wouldn’t have time, because if I were in the White House, I’d be working my ass off.” And later at an election rally in Alabama he promised: “If it rains, I’ll take off my hat, and I’ll prove once and for all that it’s mine.”

His inadvertent hair-raising exposure probably proved that, but in a rather undignified way. Plus ça change.