The White Duck Case: A fowl killing in Herbert Park

Drake news: In 1942, a reluctant reporter was sent on a wild goose chase in Dublin 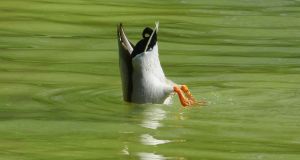 ‘That’s all wrong, it wasn’t a goose...” Photograph: iStock

As the Irish Times reporter approached two men cutting the grass at Herbert Park in Dublin, a feeling of foolishness apparently set in.

The men seemed busy, and the reporter was apologetic about the opening question – it was likely a waste of their time. Was there any truth in the story a reader had sent in earlier in the week - that a goose had been strangled to death by murderous bindweed a few days beforehand?

“That’s all wrong,” replied one of the workers, “it wasn’t a goose.”

Owing to other pressing stories and “newspaper men’s natural scepticism”, the story had been put on the back burner since the tip arrived to the newsdesk two days beforehand, on Tuesday, September 1st, 1942. Now, as the unnamed reporter stood talking to the two Dublin gardeners amid what was clearly a painfully slow news day, the trip became worth it.

“It was a duck - an Australian duck,” the gardener continued, quickly adding: “But it was nearly as big as a goose, rightly enough. George Byrne that’s working up on the terrace there was the man who found it.”

The reporter left the men to their work and wandered off in search of Mr Byrne, who confirmed the play-by-play.

“The duck was the largest of four which had been presented to the park a year ago,” reads the story of the encounter, published in The Irish Times on September 3rd that year. It appeared on the front page - alongside reports of building tensions at Stalingrad, and above a short story about fixed maximum pricing for biscuits.

The “White Duck Case”, began earlier in the week, when Mr Byrne noticed the bird’s absence from the pond. The gardener knew the park well - including the ducks’ favourite nesting spots. That’s where his search started - and ended.

In the middle of the pond, on a small island planted with a few shrubs, he made the grim discovery.

“He found it dead, sitting on a nest containing fifteen eggs and the strands of a convolvulus plant gripped tightly around its neck.”

There were no witnesses to the “Herbert Park Killing”, as it was headlined, but the gardener proffered his own theory: “The duck was sitting on its eggs, as it is accustomed to do for some days at the time of hatching. It dipped its head to pick up a leaf or something edible, and in doing so, poked its head into a loop in a convolvulus plant, which was twisting itself about the branches of a nearby shrub.”

At this point, went the theory, the duck panicked. “Feeling the tangle around its neck, it twisted its head and neck, trying to get free. But a convolvulus - as Mr Byrne demonstrated to our reporter - in such circumstances works on the slip-knot principle: the more the duck struggled, the tighter it drew the strands, and finally, in a frantic effort for release, it drew the strands so tight that it strangled the body.”

The position of the dead duck seemed to firm up the story.

Mr Byrne freed the animal’s body, with some difficulty, before leaving the plant free “to concentrate on its usual task of strangling - as it often does - young shrubs and trees.”

This story is from the Lost Leads series - a revisiting of lesser-known stories that have made the pages of The Irish Times since 1859. What can you find? Let us know on Twitter: @irishtimes or @deanruxton. For more information on subscribing to the archive, see www.irishtimes.com/archive