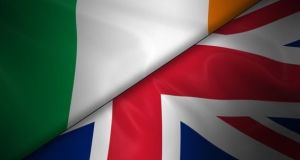 Language the party uses to describe the Republic, or rather to avoid describing it, has come into sharper focus since the general election.

What’s in a name? Quite a lot if you are engaged in the linguistic contortions Sinn Féin use to avoid calling the two political administrations on this island by their officially-recognised names.

“The name of the State is Éire, or, in the English language, Ireland,” declares Article 4 of the Irish Constitution though not for Sinn Féin for which Ireland is the politically divided island and not the State.

Similarly, the name “Northern Ireland” is regarded as a British construct and is anathema to Sinn Féin supporters who prefer “north of Ireland” which sounds like a slip of the tongue but is intended to convey, in their eyes, the illegitimacy of the political entity north of the border.

This extends to its ministers in the Northern Executive not using the name Northern Ireland, though they are in government there.

Such use of language can seem “childish or bizarre”, says Professor Jonathan Tonge of the University of Liverpool who has previously written about Sinn Féin’s dilemma of “serving in a government of a northern state(let) whilst refusing to use the state(let’s) name”.

The language Sinn Féin uses to describe the Republic, or rather to avoid describing it, has come into sharper focus since the party won the largest share of votes in the general election.

In a long blog post on the An Phoblacht website after the poll, party chairman Declan Kearney referred to the Republic as the “Southern State” to which Irish Times columnist Kathy Sheridan responded in terms echoed by other people on social media: “If the objective really is change, an easy place for Sinn Féin to start would be with language. We do not refer to our Republic as ‘the Southern State’ or ‘the Free State’. The name is Ireland.”

In her column in An Phoblacht, Sinn Féin deputy leader Michelle O’Neill described the Republic as the “26 counties”, while party activist Michael Doyle - the election agent of Waterford TD David Cullinane - exclaimed that “we broke the bastards. We broke the Free State” in a now notorious “Up the ’Ra” video that was posted online.

The linguistic contortions extend to the party’s more mild-mannered housing spokesman Eoin Ó Broin. In his book Home: Why Public Housing is the Answer, he calls the Republic “Southern Ireland” - the same name given by the British to the shortlived entity which was created as a result of the Government of Ireland Act (1920) as a counterpoint to Northern Ireland.

Ó Broin explains: “Throughout the book the term South of Ireland refers to the entity officially known as the Republic of Ireland. Given that I am a Sinn Féin TD and committed Irish republican, I doubt you need me to explain the rationale for this.”

But the reasons for the convoluted language are not always apparent to many people in the Republic.

“That language might come as a surprise to some people in the Republic of Ireland, but don’t forget it was used in official Irish documents that would refer to the ‘Six Counties’. That changed when Seán Lemass came into power,” says Dr Peter McLoughlin, a lecturer in Irish politics in Queen’s University Belfast.

“You still have a position where Sinn Féin are really committed ideologically and want to stress that to their supporters. It’s a way for Sinn Féin constantly and subliminally in using those terms to continually convey the idea that partition is still there and they do not accept it.”

The language choice is deliberate, adds Prof Tonge. “I think the discourse/terminology reflects a commitment to republican principles and a determination to be seen as committed,” he explains.

“I understand why they would not use the term Irish Republic as a true Republic, in the Sinn Féin worldview, cannot be established until a 32-county united Ireland is established.

“There is a sensitivity regarding being seen as sellouts and also it’s useful for Sinn Féin to continue to show its radicalism and difference from Fianna Fáil/Fine Gael in the terminology.”

Both academics state that the language of republicans is changing. The phrase “occupied Six Counties” is a relic of the Troubles except among dissident republicans. Similarly, “Free State” and the people in it known as “Free Staters”, is less used now and has been replaced by the phrase “26 counties”.

This could be more than a matter of linguistics if Sinn Féin are the lead party in a future government.

“If you had a Sinn Féin taoiseach or a foreign minister, you would have to get some agreement on the terms to be used,” says Dr McLoughlin.

“There is a constant calibration of language. There has been a continued evolution in the South. I guess those conversations will be ongoing.”

Given that Sinn Féin president Mary Lou McDonald has aspirations to be taoiseach, what will be the name of the state in front of her when she sits down at the negotiating table with the 26 other EU leaders? Currently it is Éire/Ireland.Will she be the only EU leader at the table not to recognise the name of the state she is representing?

“I don’t follow why they [Sinn Féin] don’t the use term Ireland,” says Prof Tonge. “It would be ‘ideologically sound’ as it represents the nation even if part of that nation is under the control of another sovereign power. It wouldn’t cost Sinn Féin anything to simply use that term.”

1 Coronavirus: Ireland should ‘look seriously’ at closing borders to keep new infections out
2 'The last time I saw her was when she was being put into the ambulance'
3 North Korea says it conducted successful test of multiple rocket launchers
4 Coronavirus: Nagging doubts fill hospital staff’s heads
5 Trump boasts of coronavirus ‘ratings’ as top expert warns of up to 200,000 US deaths
Real news has value SUBSCRIBE