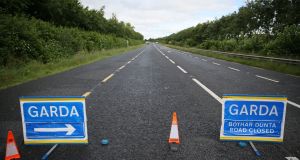 Gardaí are appealing for anyone with any information about either incident to come forward. Photograph: Brian Lawless/PA Wire

An 11-year-old boy who was seriously injured in a crash in Co Donegal on Friday evening has been transferred to a Belfast Hospital for emergency treatment.

The child was struck by a van shortly after 5.30pm at Slavery Road in Buncrana. The victim was along with a friend when he was struck by the van being driven by a local man.

He was treated at the scene by emergency services personnel and removed by ambulance to Altnagelvin Hospital in Co. Derry but has since been transferred to the Royal Victoria Hospital in Belfast.

The victim’s injuries are understood to be serious.

The driver of the van, a man in his 50s, was uninjured but is being treated for shock.

Garda Supt Eugene McGovern said the area has been sealed off and a full forensic examination is currently being examined by scenes of crime officers.

He appealed for anybody who was in the area and who may have witnessed anything to come forward.

“We have received some witness statements but we are appealing to anybody who was in the area at the time and who has not spoken to Gardai to come forward.

“This incident happened in what is a built-up area and there is a lot of traffic,” he said.

Separately, a man in his 40s was killed when the van he was driving collided with a tree between Goresbridge and Bagenalstown in Co Kilkenny in the early hours of Saturday morning. He was critically injured during the incident and was later pronounced dead at St Luke’s Hospital.

Gardaí are appealing to anyone who may have information regarding the collision, particularly any road users with camera footage who were travelling the R705 road between Goresbridge and Bagenalstown between 12.00am and 01.00am on to contact Thomastown Garda Station on 056 775 4150, the Garda Confidential Line or any garda station.

Meanwhile, gardaí in Co Cork are renewing their appeal for information on a road traffic collision that took place on Harbour View Road, Knocknaheeney on Wednesday, February 19th.

The car collided with a wall on the road and female passenger in her teens was pronounced dead at the scene. Two males in their teens were the driver and a second passenger in the vehicle who received serious injuries.

Gardaí are looking to speak to a taxi driver who was in a white Toyota car who was travelling on Harbour View Road between 11.30pm on Wednesday and 2am on Thursday morning.

Anyone with information regarding the incident is asked to contact Gurranabraher Garda Station on 021 494 6200, the Garda Confidential Line or any garda station.