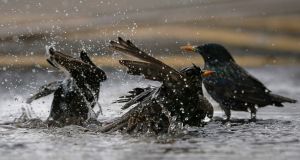 A group of starlings bathe in a puddle in Howth on Friday. Photograph: Crispin Rodwell/The Irish Times.

A status yellow rain warning has been issued by Met Éireann for most of the north west and midland counties as a weekend of rain, sleet and high winds is set to hit the country.

The rainfall warning comes into effect at 8pm on Sunday night until Monday morning for all of Connacht as well as counties Cavan, Monaghan, Donegal, Longford, Louth, Offaly, Westmeath, Meath, Clare and Tipperary.

The rain will lead to accumulations of between 20 to 25mm, with higher totals possible in upland areas.

The forecaster said the rain is likely to be preceded by a period of snow in parts of Connacht, Ulster and north Leinster before turning to rain later in the night.

The combined effect of rainfall and snow melt may lead to flooding in some areas.

Based on weather projections, the River Shannon’s water levels may exceed the ten-year flood mark on Tuesday.

The Minister of State at the Office of Public Works with responsibility for flooding, Kevin Boxer Moran, said local authorities from Cavan to Limerick were on high alert.

According to Westmeath County Council, water levels on the Shannon in Athlone are continuing to rise, resulting in water on the minor roads in the lower parts of the town. However, currently water levels remain 0.8m below the highest level recorded in the winter of 2015/2016.

The local authority said no residences are at imminent risk and that staff are on the ground putting in flood barriers.

Some of the first water pumps have been deployed in Athlone this morning.

Meanwhile, in co Clare, sandbags and pumping generators are being distributed to 10 houses in Springfield, which was one of the worst affected areas in the country during the bad flooding periods of 2015 and 2009.

Clare County Council will check on people living in the area over the coming days to monitor how rising water levels are affecting them.

In addition a status yellow wind warning for Donegal remains in place until 8 pm Saturday night with gusts of 90 to 110 km/h and possibly higher in coastal areas.