‘You can’t say stuff, because it’s racism, but it will generally be males of a Muslim persuasion’ 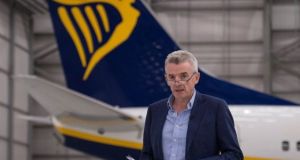 Ryanair chief executive Michael O’Leary is facing criticism after he was quoted as claiming terrorists “will generally be males of a Muslim persuasion”. He has subsequently apologised “for any offence caused”.

The outspoken airline boss’s comments have been branded “very irresponsible” by the Islamic Centre of Ireland.

The 58-year-old told the Times newspaper that families with young children should be waved through airport security because there was “virtually” zero chance of them being bombers.

“Who are the bombers? They are going to be single males travelling on their own,” he said.

“If you are travelling with a family of kids, on you go; the chances you are going to blow them all up is zero.”

He added: “You can’t say stuff, because it’s racism, but it will generally be males of a Muslim persuasion. Thirty years ago it was the Irish.

“If that is where the threat is coming from, deal with the threat.”

On Saturday morning, referring to the story in the Times, Ryanair said: “The headline in today’s paper is simply inaccurate. No call for extra checks on any group or persons was made.

“Michael was only calling for more effective airport security checks which would do away with much of the unnecessary queues at airport security today for all passengers. He apologises sincerely for any offence caused to any group by today’s inaccurate headline.”

The Dublin City Interfaith Forum (DCIF) has condemned “unreservedly, and with one unified voice” comments by Mr O’Leary that terrorists “will generally be males of a Muslim persuasion”. He subsequently apologised “for any offence caused”. The DCIF represents people from Christian, Muslim, Jewish, Hindu, Buddhist, Baha’i, and Sikh, religions in the city

The DCIF said his comments only served “to fuel an atmosphere already rife with unjustified anti-Islamic feeling and Islamophobia”.

In a statement it said such “racial and religious profiling condemns and tarnishes a whole community for the actions of a few, and is by its very nature racist and discriminatory. O’Leary’s comments suggesting that Muslim males should be singled out by security at airports only serves to fuel an atmosphere already rife with unjustified anti-Islamic feeling and Islamophobia.”

The DCIF called on all public persons, with an audience for their words and statements, “to moderate their language, and to be mindful of the harm that they can do with careless and racist comments”.

There was “no place for the kind of racist and inflammatory language used by O’Leary in civilised public life” it said, and hoped Mr O’Leary would “reflect and learn from this shameful incident.”

He should, the DCIF said, “make some kind of real gesture to indicate that he has learned from his careless speech.”

In the current climate it was “more important than ever that the kind of language and opinions voiced by O’Leary are challenged, condemned and widely acknowledged as being unacceptable,” it said.

The statement concluded with an offer of “support and solidarity to our Irish Muslim brothers and sisters at this time, and to all the fine Muslim citizens that count Ireland as their home”. It said it would “never remain silent in the face of such racism and bigotry”

Earlier, the Head Imam of the Islamic Centre of Ireland, Shaykh Dr Umar Al-Qadri, said: “In the current climate of anti-Muslim sentiment and Islamophobia on the right, to give general statements like this is disappointing because it tarnishes the whole community and justifies racism and discrimination against the community.

“Terrorism is not only confined to one community. We find extremist elements in every community – recently a white German killed nine innocent people in Germany.

“I’m a frequent traveller. I fly frequently with Aer Lingus and Ryanair. Already as Muslims, particularly single men, we have to go through many checks when we travel. This has been going on for a number of years. At the moment, I’m not calling for a boycott of the airline. Hopefully, if he clarifies his comments there will be no need for that.”

Meanwhile, a spokeswoman for the Muslim Council of Britain said: “Michael O’Leary should be under no illusion: his comments are racist and discriminatory.

“He openly advocates discrimination against ‘males of a Muslim persuasion’, which presumably is not based on specific intelligence but solely whether someone ‘looks or acts like a Muslim’.

“This is the very definition of Islamophobia.”

The spokeswoman said Muslims already face challenges in airline travel and added: “It is a shame that such racism is being expressed so openly, and that the CEO of a large airline would so want to discriminate against his customers so brazenly.”

“If he can tell me what colour Muslims are then I’d be very happy to learn from him – you can’t judge a book by its cover,” he told the Times.

He added: “In Germany this week a white person killed eight people.

“Should we profile white people to see if they’re being fascists? He’s being very blinkered and is actually encouraging racism.”

Safiyya Amira Shaikh (36) was born Michelle Ramsden but converted to Islam in 2007 and is believed to have become radicalised in 2015 after following extremists online.

The airline chief is no stranger to controversial remarks, particularly his comments on environmentalists and travel agents, using the phrase “shoot them” in reference to both.

He has also famously proposed coin-operated toilets on flights and dressed up as the pope to launch Ryanair’s route from Dublin to Rome. – Additional reporting PA/Bloomberg