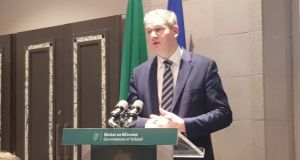 Taoiseach Leo Varadkar has appointed Minister of State Sean Kyne to the Seanad to fill the vacancy left by Frankie Feighan who was elected to the Dáil.

The Government Chief Whip, who lost his Galway West seat in the General Election, will not take the Seanad salary for the few weeks the Upper House remains in place.

Mr Feighan, now a TD for Sligo-Leitrim was a Taoiseach’s nominee.

Mr Varadkar said: “Sean is an excellent local representative who has worked tirelessly for his constituents in Galway West.

“He has never been afraid to take principled positions and he performed his duties as Chief Whip in the previous Dáil with exceptional tact and ability. Sean will also continue in his role as Minister for the Gaeltacht.”

Mr Kyne (44) is understood to have been selected in part because he took the decision to support social housing in his home town of Moycullen, which was controversial locally.

He also supported direct provision for asylum seekers in Oughterard.

Appointing a new Senator will benefit Fine Gael in upcoming elections to the Upper House.

Some 43 Senators are elected to five vocational panels by the 160 incoming TDs, the outgoing 60 Senators and city and county councillors, a total electorate of about 1,200 people.

Having a new Senator in place to vote for the party’s candidates could make a difference to the chances of Fine Gael candidates when the Seanad election takes place next month.

Mr Feighan was one of then taoiseach Enda Kenny’s 11 nominees in 2016, and was appointed without having to contest an election. Only these Senators can be replaced without an election being required.

Party loyalists have been chosen for such appointments in the past, and the brief stint in the House comes with perks such as access for life to Leinster House, its car park and the Oireachtas members’ bar.

Mr Kyne already enjoys such privileges, having been a TD. He was first elected to the Dáil in 2011 and held the seat in 2016.