What are Joe Biden’s Irish roots? 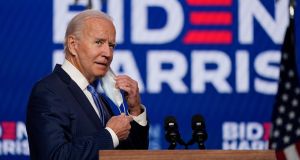 US president-elect Joe Biden has spoken about his Irish heritage on numerous occasions, coming here on an official visit as vice president in 2016 and even referencing poet Séamus Heaney in his speeches.

The successful Democratic candidate can trace his Irish roots back to both the Blewitts from Co Mayo and the Finnegans from Co Louth.

His great-great grandfather Patrick Blewitt was born in Ballina, Co Mayo, in 1832. Patrick left Ireland in the autumn of 1850 to settle in America. He did return to Ireland the following year though, to bring his parents Edward and Mary and his siblings to America.

Patrick had a son, Edward F Blewitt, who was born in New Orleans in 1859. He was named after Patrick’s father who died in a drowning accident in 1872.

Congrats to you Mr President 🤣 https://t.co/01pVm0dosu

Edward F Blewitt graduated as a civil engineer and went on to be employed as a city engineer before his election to the Senate in 1907.

Blewitt married Mary Ellen Stanton and they had four children together – Gertrude, Patrick, Arthur and Geraldine. Geraldine married Ambrose Finnegan and they had a daughter Jean, born in 1917, who was Joe Biden’s mother.

Biden’s other great-great grandfather was Owen Finnegan, from the Cooley Peninsula, Co Louth. He married Jean Boyle in 1839. The first four children were born there, including James Finnegan in 1840, Biden’s great grandfather.

The family moved to America in the late 1840s and settled in Seneca, New York. The family emigrated with Owen’s brother John and other cousins. Owen and Jean both died in 1874 and James moved close to Scranton with his wife Catherine Roche and they had six children, including Ambrose J. Finnegan (who as we know, married Geraldine Blewitt).

Mr Biden’s Irish relations through the Finnegan line include Ireland rugby internationals Rob and Dave Kearney. Their father David Joseph Donald Kearney is a fifth cousin of the president-elect, according to research carried out by Epic The Irish Emigration Museum.

Four years ago, Mr Biden congratulated “cousin” Rob Kearney and the Irish team “on behalf of the Bidens” for beating New Zealand for the first time - which happened to be on US soil. Kearney tweeted back this weekend: “Congrats to you Mr President”.

Mr Biden’s Irish roots have drawn international attention since the election. A clip of an exchange between BBC New York correspondent Nick Bryant and Mr Biden from the campaign trail went viral on Saturday.