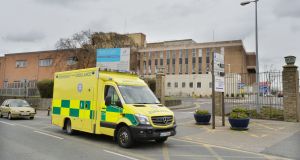 A man (20) received injuries to his hand and was taken to Our Lady of Lourdes Hospital. File photograph: Alan Betson

A man in his mid-20s has been charged in relation to an aggravated burglary at a property in Dundalk, Co Louth last night.

Gardai received reports of an assault at a residential property in Muirhevnamor at 9pm. A man (20) received injuries to his hand and was taken to Our Lady of Lourdes Hospital. His condition is described as not serious.

A man in his mid-20s was arrested at the scene and was taken to Dundalk Garda station where he was detained under Section 4 of the Criminal Justice Act, 1984.

He has since been charged and is due to appear before Dublin District Court at the Criminal Courts of Justice at 10.30am.