Cyberbullying rates for Irish children among highest in EU - expert 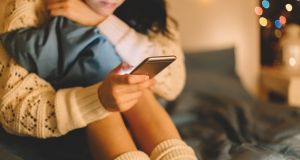 Irish cyberbullying figures are one of the highest in Europe, followed by Germany and Italy. Photograph: iStock

Irish children experienced one of the highest rates of cyberbullying in Europe during the Covid-19 pandemic, an anti-bullying expert has said.

Dr Tijana Milosevic, from DCU’s National Anti- Bullying Centre, said a preliminary report shows children in Ireland experienced hurtful messages being sent to them, mean messages being passed around or posted where people could see them and are excluded from group activity online.

Speaking at the Oireachtas education committee on Thursday, Dr Milosevic said while the numbers for the frequency of this bullying type will be published later this month, the Irish figures are one of the highest in Europe, followed by Germany and Italy.

The representatives from the anti-bullying centre referred to another study they conducted, which found that 28 per cent of children have been the target of cyberbullying, while half of the children sampled reported to have seen others being cyberbullied.

Dr Milosevic added that there was a 20 per cent increase in “cyberbullying victimisation” during the lockdown.

However, the academic said the “sharp increase” during Covid-19 was only seen in certain groups, such as in younger boys, and that it wasn’t evenly attributed across all age groups or across all platforms.

“It’s not as huge of a spike that we might have expected through media reports that we were seeing during the lockdown,” she added.

Dr Milosevic said there was also a need to “bring in more attention” to the educational platforms used to assist students during the Covid-19 pandemic.

“As Teams and Zoom are being used for educational purposes, definitely cyber bullying can slip into that,” she said.

Speaking at the same meeting, Dr Seline Keating, assistant professor and research fellow in anti-bullying studies at DCU, said SPHE (Social, personal and health education) was vital to educate chidren on bullying and the current allocation of 30 minutes per week to the subject is not adequate.

“That [SPHE]is the subject area where all of the skillsets for bullying prevention happens. We learn how to become a good decision maker, you learn how to manage and regulate feelings and emotions and you learn how to communicate and resolve conflict,” she explained.

She added that the education of the subject for teachers should be improved to ensure they can teach it competently.

Meanwhile, Dr Angela Mazzone, from the same centre, called for a national anti-bullying programme to be implemented. She said tackling the issue should be a combined effort of students, parents and educators.

She described bullying as a “complex phenomenon” which happens when supervision is low, meaning everyone must be involved.

“We recommend that anti-bullying prevention and intervention should be embedded into existing school policy and school curricula,” she added.

The meeting was held on the first International Day Against Violence and Bullying in Schools, including cyberbullying, which aims to raise awareness of the help available to target and deal with bullying in schools.