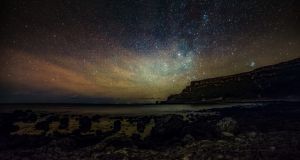 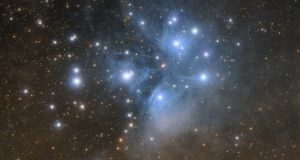 Chances are you will come across a few products during the month that are named after a celestial object. One noticeable brand is Subaru cars. Their badge consists of six stars, with one now more prominent, and is the insignia adopted by a conglomeration established by six Japanese manufacturers in the 1950s. Subaru also just happens to be the Japanese name for the Pleiades star cluster in Taurus.

The compact swarm is often better known as the Seven Sisters and is now visible above the eastern skyline after dark, with five or six of its brightest members easily seen at first glance. Some observers have suggested it looks like a tiny version of The Plough, which is a very good description.

While a few additional stars may be picked out with the unaided eye, it is with binoculars that the Pleiades are truly spectacular. The field is strewn with numerous glittering shards of cut crystal and the blue-white light of these suns hints at their youth.

The cluster is roughly 115 million years old and lies about 445 light years away so the light we see this month started its journey just before Galileo was the first to sketch the Pleiades through a telescope in the winter of 1609/10. A drawing in his great work Siderius Nuncius shows a couple of dozen stars.

We now know of more than a thousand individuals in the group, all of which were born in the same region of space. In time, the gravitational influence of our galaxy will disrupt the cluster and the Pleiads will go their separate ways. Long exposure photographs show a scene wreathed in gas and dust illuminated by starlight, but this a chance encounter with an interstellar cloud as the cluster’s own embryonic material dissipated long ago.

Because they lie close to the celestial equator the Pleiades are visible the world over and are woven into diverse myths, as well as having descriptive names such as those listed in An Gúm’s Foclóir Réalteolaíochta like an tÉillín (“brood” or “clutch”), an Streoillín (“straggling line”), and an Tréidín (“flock”). Indeed, the resemblance to a flight of birds is noted by many early cultures.

The Pleiades were often associated with the onset of months of cold or feast days for souls of the dead, as their culmination at midnight was on the cusp of winter and, for Druids, the festival of Samhain. The cluster’s appearance is still gauged by some native peoples to predict whether it will be too wet or dry to plant crops, while they were also said to delineate the sailing season in Mediterranean regions.

Easy to overlook in Taurus is another prominent star cluster called the Hyades. This more scattered group has a V-shaped pattern pointing away from the orange star Aldebaran, which is itself not a member as it is only half as distant. The Hyades are much older than the Pleiades and are a laboratory for testing theories of stellar evolution.

In Greek myth, the Pleiades are the daughters of Atlas and Pleione, with six of the seven marrying gods. The remaining daughter Merope was said to have faded away after her wedding to a mortal. Interestingly, we find reference to this “lost” Pleiad in stories from all over the world. Some have suggested the star suffered a genuine loss of brightness in the past, but other tales mention a different Pleiad missing. The riddle still endures, just as the beautiful Sisters continue to captivate and enchant these evenings.

Last quarter moon falls on November 8th, the new moon on the 15th and first quarter on the 22nd, with full moon on the 30th coinciding with a partial penumbral lunar eclipse.

These types of eclipses are more subtle as the moon only dips into the more diffuse outer parts of Earth’s shadow cast in space.

The eclipse commences at 7.32am on the morning of the 30th but you will not notice anything until close to moonset at 8.12am. That is more of a hope to be honest and counts on the moon’s glare being muted when low down, which may help emphasise any very slight staining near the top of its disk. We will miss the eclipse maximum at 9.42am as it occurs after moonset from here.

Mercury is visible in the morning sky right throughout November but is highest above the south-eastern skyline around 6.45am on the 10th. It can be found to the lower left of Venus and near Spica at this time but is a bit brighter than the star. The Moon also acts as a guide when close by on the mornings of the 13th and 14th.

Venus rises three hours before the Sun during the month and dominates the eastern sky before the first blushes of dawn appear. It seems to narrow the gap daily to Mercury but gets no closer than 12 degrees away (a little more than a fist-width at arm’s length) on the 13th. Their separation stays static for about a week before widening again as Mercury dives sunward.

Mars is receding in the rear-view mirror so to speak, as Earth has now overtaken it on our faster orbit. But the planet still smoulders bright orange in the eastern sky as soon as darkness falls and remains on view until the early hours. The gibbous moon is near Mars on the evening of the 25th.

Jupiter and Saturn fit in the same low-power binocular field-of-view in early November but are only half that distance apart by the end of the month as the gap between them slowly narrows. The two planets can be found in the southwest these evenings and set after 8pm. Look for them to the upper right of the Moon on the 19th.

Two meteor showers active during November are the Leonids and northern Taurids. Rates from the former are normally very low during its peak on the 16th but reach storm levels every 33 years or so when the associated parent comet returns to the inner solar system, which next happens in 2032.

The northern Taurids reach maximum on the night of November 11th and generally exhibit low rates too. But they can spring surprises and sometimes yield slow moving bright fireballs.

A new launch date for the next Crew Dragon mission to the International Space Station was set shortly after October’s article was published. The mission is now slated to lift off on November 11th and will ferry four additional members of the latest Expedition crew to the station.

Morning passes of the ISS run until November 9th after which it switches to the evening sky from the 20th. Predictions for your location can be calculated on Heavens Above.

Chang’e, named for the Chinese Moon goddess, is China’s lunar exploration series that first began in 2007 when Chang’e 1 reached lunar orbit. Chang’e 5 is a robotic sample return mission that is scheduled to launch at the end of November. Current plans are to collect about 2kg of material from below the Moon’s surface for later return to Earth.

John Flannery is a long-time amateur astronomer with an interest in the history and lore of the sky along with astronomical phenomena observable with the unaided eye. He is a member of the Irish Astronomical Society