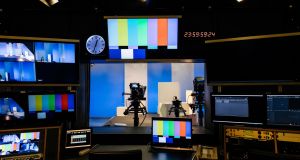 While political advertising is permitted online and in print media, it is not allowed on broadcast media. File photograph: Getty

The chief executive of the Broadcasting Authority of Ireland (BAI) has said strict rules on political advertising on broadcast media should be relaxed.

“I think the way things have evolved, unless you’re going to have an outright prohibition on political advertising, it’s hard to justify a case to maintain that prohibition for the traditional media only,” he said.

While political advertising is permitted online and in print media, it is not allowed on broadcast media.

“If it’s going to be permitted on new media, then clearly there has to be some adjustment to traditional media in my view. There should be relaxation on the prohibition, that would be ultimately what I see happening,” said Mr O’Keeffe.

The BAI chief executive was speaking following the publication of a report commissioned by the authority and carried out by DCU’s Future of Journalism (FuJo) institute into political advertising on Google, Facebook and Twitter during this year’s European Parliament elections. The report, which was one of 13 undertaken by member states during the elections, was designed to test compliance by social media platforms with self-regulatory codes of practice on disinformation.

It found that the level of transparency across the platforms was “mixed”, with divergences between the quality and level of detail in the data made available. According to the report, there was inconsistency in the information made available by platforms which “resulted in a systematic lack of transparency and impeded a comprehensive understanding of online political and issue-based advertising”.

It found that in using tools made available by Facebook, Google and Twitter “it is not possible to be wholly confident that the libraries capture and report all political and issue-based averts, all of the payer information, and that all the political adverts were appropriately labelled as such”.

While the authors of the report found the platforms had made efforts to support the integrity of elections, “much more is required to facilitate effective media monitoring of digital political advertising and campaigning”.

Director of the FuJo institute Jane Suiter said platforms had to move to a situation where information on advertising was available in a uniform way and was searchable in real time.

“Our findings indicate that the digital platforms have much room for improvement if they are to comply with their commitments under the code of practice on disinformation,” she said.

Liz Carolan, executive director of non-profit group Digital Action, which works on the intersection between politics and digital society, praised the BAI and DCU for investing in the research, but added: “It is telling that a main finding is that they are not getting enough information to be able to properly monitor our elections. Voluntary and ad hoc ad transparency measures will only ever get us so far, what we need is a common set of standards, applied universally, and we still really need a permanent election commission.”