Coveney in informal talks over alternatives to Brexit backstop 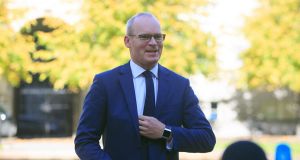 Tánaiste Simon Coveney speaking to media at Government Buildings: ‘Of course there are conversations, as you would expect, exploring concepts, what might work, what won’t work.’ Photograph: Gareth Chaney/Collins

Tánaiste and Minister for Foreign Affairs Simon Coveney has had informal discussions with British ministers about possible alternatives to the backstop, he said on Tuesday, but the EU is still awaiting formal proposals from the UK.

“We await written proposals from the UK side. We simply haven’t seen any written proposals to date,” Mr Coveney said this afternoon. However, he also revealed that there are significant informal contacts on the shape of a possible new deal.

“So of course there are conversations, as you would expect, exploring concepts, what might work, what won’t work,” he said.

The Government insists that it will not negotiate with the British government on Brexit, as negotiations can only take place between the UK and the EU task force led by Michel Barnier.

However, Mr Coveney’s remarks reveal an intensification of contacts between Dublin and London as the clock ticks down towards a no-deal Brexit at the end of October. Mr Coveney said that he had “an obligation to be both truthful and consistent” in his talks with British ministers.

“If the current position from the UK side is that the backstop needs to be removed from the withdrawal agreement, well then it is perfectly reasonable request by us to say, well, that creates huge problems, how are you going to solve them?” he said.

“Just because Boris Johnson says the backstop needs to go, doesn’t mean that everybody else will respond positively to that . . . There is an obligation on the party that is looking for change to come up with solutions that can deal with the consequences of what they’re asking for.

“And if that question can’t be answered, we won’t have a deal,” he said.

Mr Coveney said the Government would not agree to a new deal that requires permanent checks at or near the Border. “We won’t sign up to any agreement that requires checks,” he said.

In a no-deal situation, he said, there will be “checks somewhere” but contrary to what the Taoiseach suggested recently, Mr Coveney said “I don’t they’ll be near the Border actually”.

Discussions are continuing with the European Commission, he said, about where and when checks would need to be implemented. He said some checks would be a “temporary and emergency response” to a no-deal Brexit.

Coronavirus: New Garda powers a response to ‘slippage’ on no travel rule 13:35
Harris: Arrest ‘will not be first port of call’ for gardaí enforcing restrictions 13:34
Coronavirus: Older people at risk of financial abuse due to restrictions 13:16
Micheál Martin raises need for ‘end point’ of coronavirus restrictions 12:50
Coronavirus: ICU in Dublin’s Mater is full amid warning over staffing 12:22

1 Coronavirus: New Garda powers a response to ‘slippage’ on no travel rule
2 Coronavirus: More ‘striking’ evidence BCG vaccine might protect against Covid-19
3 Coronavirus: Minister signs regulations giving gardaí powers to enforce lockdown
4 Coronavirus: ICU in Dublin’s Mater is full amid warning over staffing
5 Coronavirus: Big problem now a series of smaller ones and there could be nasty surprises
Real news has value SUBSCRIBE