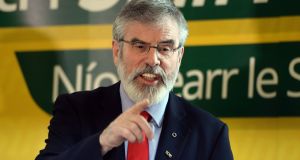 As late as last week, attending the Fine Gael think-in in east Cork, Taoiseach Leo Varadkar was suggesting that the proposed referendum to extend the right to vote in presidential elections to Irish citizens living abroad and in the North would go ahead in November.

This has been the intention since earlier this year, when the Cabinet gave the move the go ahead, acting on a recommendation of the Constitutional Convention back in 2013. But there has been deep scepticism among many people in Government and elsewhere about the proposal and at a meeting between opposition leaders and the Taoiseach on Monday evening, it became clear to most people present that the vote was very unlikely to take place this year.

The euphemism is that “more work is needed”. It translates as a rethink about the content and timing of the vote.

Objections to holding the referendum this year have centred around the issues of both content and timing. Some people in the Government, including in the Cabinet, are not convinced about the whole idea of extending the franchise, even it is just for the presidential election. Their objections are both principled and political.

They wonder whether it is wise to let people who are not resident in the state vote for the head of state — especially when, in the case of Irish citizens living in the North, they are numerically material in any election. In other words, votes for Irish citizens abroad is more than just a generous symbol of outreach — it will dramatically alter the shape of presidential elections in the future.

The political objections are related to this, and are found in all three old establishment parties of Fine Gael, Fianna Fáil and Labour. They are most frequently expressed in three words: “President Gerry Adams”. They wonder why the Government should import hundreds of thousands of Sinn Féin voters into the next presidential election.

These views, it should be said, are nowhere near universal in Government and will be repugnant to many nationalists, North and South. But they are real, and insiders say they have given the Government pause for thought. But more influential has been another argument related to timing: it says that this is not the time, given the anxiety of many unionists, to open the door to an election campaign in the North for a position in Dublin.

With the very future of the United Kingdom under pressure because of Brexit, and signs that politics in the North is retreating into its tribal foxholes, the move would be seen by some unionists, it is argued, as a sign of creeping unification. And this, it is said, is not the time for that.

For all these reasons, the vote has been shelved for now. There is still an intention in Government to go ahead with the vote at a more opportune time.

Others wonder if it will ever happen. “Not a snowball’s chance,” says one senior politician.