Government ‘will not comply’ with findings on Public Services Card 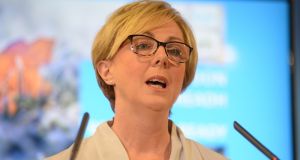 Minister Regina Doherty: ‘We don’t agree with any of the eight findings and we have written to the commission to confirm that.’ Photograph: Dara Mac Donaill / The Irish Times

Minister for Employment Affairs and Social Protection Regina Doherty has said her department will not comply with any of the directions from the Data Protection Commissioner (DPC) on its Public Services Card project.

A complicated, lengthy and costly legal process now lies ahead between the DPC and the department, which on Tuesday published the long-awaited report into the Public Services Card (PSC) project by the commissioner.

In a statement issued alongside the report, Ms Doherty said that while she respected the office of the DPC, which produced the report, “in this instance based on strong legal advice, we cannot agree with the findings contained within this report”.

The report contains eight adverse findings about the PSC project, each of which Ms Doherty says her department disagrees with.

“We have strong legal advice that the existing social welfare legislation provides a robust legal basis for my department to issue PSCs for use by a number of bodies across the public sector,” Ms Doherty said.

Among the findings is that the basis for forcing users to obtain a card to access some state services is unlawful. The DPC also found that the functioning of the card is not sufficiently transparent, with users not given enough information on the card and the registration processes.

The DPC also found that the privacy statement published by the department does not have sufficient information in it, and the potential consequences for a PSC cardholder who fails to update information provided during registration were not clear enough.

In a letter from the department’s secretary general to the DPC published on Tuesday morning by The Irish Times, the department alleged that its right to fair procedures was breached by aspects of the report, which it also says has several “internal inconsistencies”.

The department also suggests that the watchdog may not have “a clear understanding of the import of its own findings” on a key issue.

“We don’t agree with any of the eight findings and we have written to the commission to confirm that,” Ms Doherty said.

For the department to act as recommended in the letter from the DPC would be illegal, she continued “We regard the legal basis underpinning this to be incredibly strong.”

Ms Doherty said in her statement that her officials had sought to engage further with the DPC on its report but “regrettably that engagement was not possible and therefore we are publishing the report without any further delay”. She said the PSC had been a “worthwhile investment in better public services”.

The Government believes that it would be potentially unlawful to withdraw or modify the PSC. The department’s statement confirmed that its intention is to continue to operate the PSC and the Safe 2 identity authentication process on which it is based.

Despite the controversies, the PSC remains popular, with 96 per cent of those surveyed saying they were either very satisfied or fairly satisfied with the process.