Department of Transport to investigate new screening system for arrivals 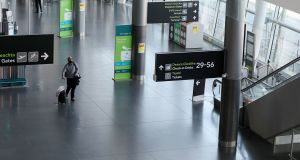 The test would be taken within 24-72 hours prior to travel. Photograph: Brian Lawless/PA Wire

Visitors to Ireland may be required to have a Covid-19 test before they travel, and could be barred from landing in the State if they test positive, an Oireachtas committee has been told.

The Department of Transport has been ordered by the Cabinet to investigate the efficacy and potential of such a testing system, Ken Spratt, the department’s acting secretary general said.

If progressed, the test would be taken within 24-72 hours prior to travel and proof of a negative test result would be presented to Irish immigration on arrival, he told the Oireachtas Covid-19 committee.

“If a positive test was returned, then the benefit of that would be that the person would not have travelled and not have potentially come into contact with other fellow travellers.

“Therefore we would be avoiding a situation where, if you had entry testing and someone was positive, we would have to follow up all the other travellers. So there is that benefit,” he said.

The cost of the test would be borne by the traveller. The Department of Transport is not considering ordering Covid-19 tests at Irish air and sea ports for passengers.

The public health advice is that existing available tests do not provide assurance and that false negative tests would offer a false sense of security.

Meanwhile, the Department of Transport told the Oireachtas committee that it is moving towards introducing mandatory face covering rules for passengers in taxis.

Separately, taxi drivers said their industry is on its knees and that work had dried up significantly as a result of the pandemic. Government support is now vitally needed, they said.

Jim Waldron of the National Private Hire and Taxi Association told the Oireachtas committee that drivers could not make a living in the industry at the moment.

Mr Waldron said there was no night-time business and clubs were not open. He said Dublin Airport was only operating 10 per cent of its business. He said that 82 per cent of drivers worked on Fridays and 62 per cent worked late in the evenings of Fridays. “That work is gone.”

Mr Waldron said most taxi drivers who went on to the Government’s Covid-19 payment were still receiving the benefit.

He said the payment was allowing them to survive. However, he said it was not sufficient to allow them to pay the bills and their bills were now backing up.

Mr Waldron said the Government should stop the issuing of new taxi licences. He said grants should be provided as well as “step down payments” for drivers who were going back to work.

He also called for an extension to the age limits for vehicles used as taxis and for the Government to introduce a (licence) buy back scheme.