Urban transport could be transformed in 6 months under stimulus plan, Ryan says 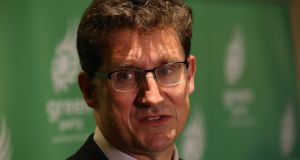 The Government’s stimulus plan provides an opportunity to transform the transport environment in urban areas within six months, according to Minister for Climate Action, Communication Networks and Transport Eamon Ryan.

Overall, the stimulus package had the correct economic approach, in terms of matching the EU on Covid recovery with strong green and digital elements, “particularly on the spending side”, he said on Friday.

Funding of €115 million for active travel, public transport and renewal of transport infrastructure would in particular support local authorities across the country in responding to Covid-19 challenges, he added.

The way it was framed acknowledged there would be limited capacity on public transport, while he did not wish to see commuters reverting to car use.

“We’ve seen some fantastic examples recently of local authorities improving towns and villages through re-orientating streets toward the pedestrian, the cyclist and public transport and I want to see that replicated in every local authority area,” he added.

Dublin City Council and Dún Laoghaire Rathdown County Council had shown what could be done quickly under Section 38 of the Road Traffic Act – even if changes were experimental. He wished to call on every city and council around country to come up with “active travel” and on-street environment measures.

Supporting cycling and walking would also help the retail sector and job creation, he believed, but it would need leadership from local authorities and politicians.

On rail, €21 million is going toward the inter-urban rail network. Support works on the Dublin-Cork line will mean 50 per cent of the line is capable of 160kmh speeds by year end – €2 million is for new and expanded local bus services .

Some €40 million is for pedestrian infrastructure; €42 million to support urban and rural cyclists and €10 million for adaptation of the road network to protect it from climate change effects and severe weather events.

On energy, the package includes €100 million in 2021 for retrofitting buildings with a focus on community retrofit schemes and supporting those in energy poverty.

An additional €15 million is to rehabilitate 33,000 hectares of Bord na Móna peatlands.

“This will reduce carbon emissions by significantly increasing the area of wetland habitats in post-production peatlands. This will create significant carbon sinks and job opportunities,” the Minister said.

Meanwhile in a briefing note prepared for its incoming Minister Michael McGrath, Department of Public Expenditure and Reform officials raised concerns about the Government’s expanded greenhouse gas reduction targets up to 2030.

Total compliance costs for missed 2020 emission targets are estimated to be between €70 million to €125 million “but will need to be reviewed to reflect the impact of Covid-19”, they noted.

If the increased target of an average 7 per cent per annum reduction over the coming decade was incorporated into a national energy and climate plan (NECP) for the EU, and was not achieved, the country faces substantially increased fines, they warned – by way of annual compliance costs in purchasing carbon credits.

Mr Ryan said the most important issue on emissions was increased ambition reflected in the Programme for Government. Denmark had committed to a 70 per cent reduction in total because of the economic opportunity in decarbonisation, yet “admitted they do not know [ yet ] how to get there”. He favoured the same approach in Ireland and believed “there is no great opposition to that direction of travel”.

The 3.5 per cent annual cut in the out-going government’s climate action plan would feature in the NECP submitted to Brussels shortly. The European Commission would then analyse how Ireland could scale-up from that.

This would be outlined in its “effort sharing” proposals for up to 2030 with a commitment to net-zero emissions by 2050 in the EU’s legislative proposals to be published in the Autumn.